10 Great Things about Being an Introvert

Success as an Introvert For Dummies 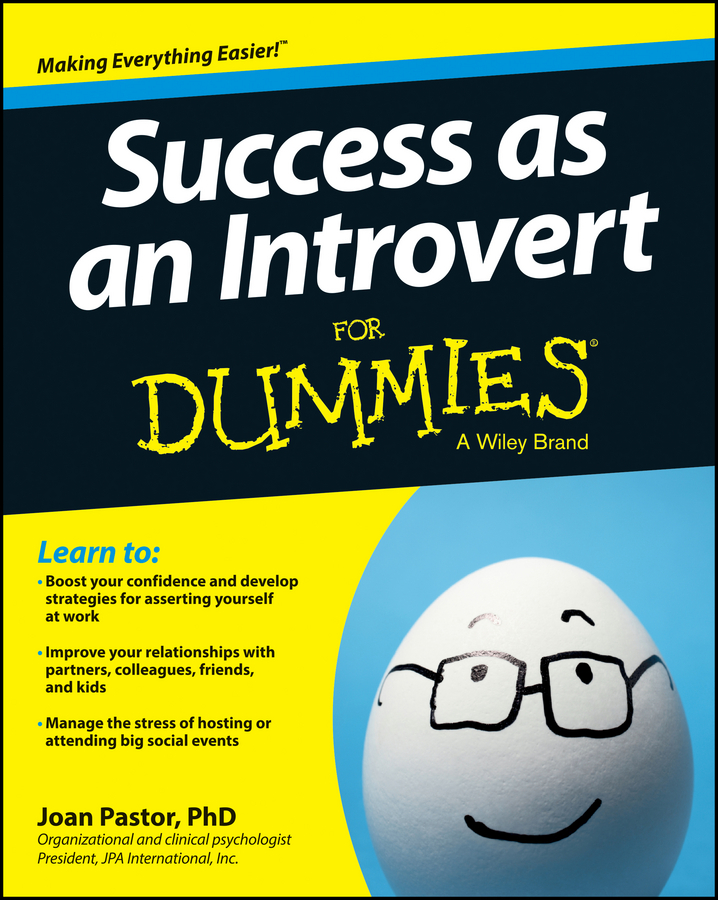 As an introvert, you have lots of advantages in life. Granted, you may not feel that way when you're forced to make small talk with strangers at an inane social event, but you really do possess enviable qualities. This article takes a quick look at just a handful of them.

You're comfortable being a party of one

Extroverts like to travel in flocks, and they have a hard time enjoying movies, theater plays, or restaurant meals unless they have company. You, on the other hand, can happily read a book at a café, watch the latest blockbuster at a movie theater, or attend a Broadway show all by yourself.

Likewise, an extrovert who's home alone for a long stretch is a sad, sad creature. But if you're an introvert who's on your own, you can find endless ways to entertain yourself. All you need is a book to read, a video to watch, an interesting recipe, or an antique table to refinish, and you can amuse yourself for hours without even noticing that no one else is there.

You can stop and smell the roses

Extroverts tend to hop quickly from one activity to another. On the upside, this means that they have lots and lots of fun experiences. But on the downside, it means that they sometimes miss out on life's quieter pleasures.

If you're an introvert, on the other hand, you tend to think more deeply and move a little more slowly. And that allows you to admire a spider's web, contemplate a poem, or even take a little time to smell that rose.

You have amazing friends

Extroverts usually have a very wide circle of friends. However many of the people they count as friends are really just casual acquaintances.

You, on the other hand, tend to form deep, strong bonds with a few carefully selected people. As a result, you create long-lasting relationships with friends who adore you — even if you never return their phone calls.

You look before you leap

Extroverts often rush optimistically into the unknown. But as a deep-thinking introvert, you're big on facts. So before you jump into a new adventure — whether it's starting your own business, getting married, or moving to a new city — you do your research. And that means you'll probably say "oops" a lot less often than your extroverted friends.

You can be the calm in the center of the storm

When things get crazy at work, the fur can really fly. Missed deadlines, high-pressure projects, and cost overruns can make everyone crazy, and that kind of stress can turn meetings into shouting matches.

When tempers are short, you're in a good position to calm things down. That's because rather than jumping in and yelling, you're likely to sit back and analyze the situation. As a result, you can often suggest smart solutions or wise compromises — as long as you can overcome your introverted reluctance to speak up.

As an introvert, you turn inward for energy instead of turning outward, which makes you prone to daydreaming. And often, that's a good thing!

It's true, of course, that too much daydreaming can be a problem (especially if the boss calls on you in a meeting). In fact, it's easy for you to develop "introvert ADD," which can cause trouble at work and at home. So you don't want to spend too much of your day in la-la land.

However, daydreaming can also unleash your creativity and help you think outside the box. In fact, some of the greatest books, poems, and physics theories of all time have come from daydreaming introverts. So dream on.

You really know your stuff

A friend of mine once went to a lecture at a zoo given by a quiet but enthusiastic entomologist. Afterward, I asked how it went. "Wow," my friend replied, "that guy sure knows his stink bugs."

Like this bug expert, introverts are often deeply knowledgeable about the topics that interest them. That's because introverts love learning, and they enjoy spending hours gathering facts. So no matter what topic fascinates you — whether it's Moroccan cooking, steam engines, or stink bugs — other people are likely to view you with respect as an authority.

You don't need a babysitter

You can avoid the parking lot crush

At the end of any event — such as a conference, a workshop, a wedding — most people tend to hang around chatting. You, however, probably sit right by the doorway so you can beat feet as soon as things wrap up. As a result, you're likely to be halfway home before the rest of the crowd starts putting their keys in their ignitions.

It's true! One of the most common comments that people make about introverts is that they're enigmatic or mysterious. And that's kind of cool, isn't it?

Why do many introverts come across as mysterious? One reason is that they don't say much, so people have to guess what they're thinking. Another is that introverts tend not to show their emotions on their faces. Now, being mysterious can sometimes be a problem if you're an innie. For example, people may think you're being aloof or ignoring them, and you may not communicate what you need from them. (It is possible to be too enigmatic.) But other times, being quietly mysterious works to your advantage because it can make people think you're hiding intriguing secrets when you're really just thinking about something mundane, like whether you remembered to buy laundry detergent the last time you were at the store.