How to Solve Polygon Problems on the PSAT/NMSQT

You will encounter polygons on the PSAT/NMSQT. A polygon is a closed, two-dimensional figure with sides made of lines. In other words, a triangle, a square, a rectangle, and any other closed shape you can create by drawing lines is a polygon.

Polygons are named according to the number of sides they have: A triangle has three sides (the prefix tri means “three”), a quadrilateral has four, a pentagon has five, and so on. How high do those numbers go? Well, a megagon has a million sides, and an apeirogon has an infinite number of sides.

These facts may help you in a trivia contest, but you don’t need them for the PSAT/NMSQT. In fact, you don’t need vocabulary to handle polygons, just math.

These concepts help you deal with polygons when you encounter them on the exam:

On the PSAT/NMSQT you may have to find the area of a polygon. (Check the information box if you need help remembering the formulas.) You may also be asked to find the perimeter, the sum of the lengths of all the sides.

Often, the easiest way to deal with polygons (especially strangely shaped polygons) is to divide them into triangles, as in this diagram: 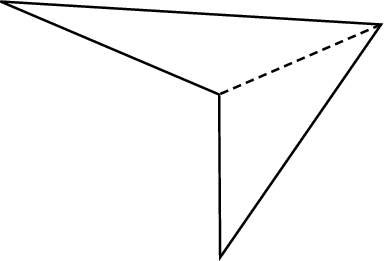 Notice the broken line? It divides this shape into two triangles. Because you know how to figure out the area, perimeter, sides, and angles of a triangle, you can handle whatever you’re asked about this figure.

When you divide a polygon into triangles, remember that the sum of the angles in each triangle equals 180°. If you’re asked to find the sum of the interior (inside) angles of a polygon, multiply the number of triangles by 180°. In this figure, for example, you have two triangles, for a total of 360°.