By: Barry Schoenborn and Richard Snyder and
Updated: 04-13-2022
From The Book: Physician Assistant Exam For Dummies 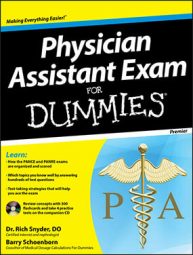 Explore Book Buy On Amazon
When you're preparing to take the PANCE or PANRE, you may feel like you have to know an endless amount of information. How will you ever remember all the details of so many diseases and conditions? Here, you can review some useful mnemonics that will not only help your recall as you prepare for your physician assistant exam but also improve your clinical acumen.

When you’re treating a non-ST elevation myocardial infarction (an NSTEMI), keep OH BATMAN in mind. The mnemonic works for treating unstable angina, too.

The person with ACS is going to be on multiple treatments at one time. For example, the person with an NSTEMI will be on IV heparin and nitroglycerin, on oxygen via nasal cannula, and on oral metoprolol.

Just because someone comes into the hospital on warfarin (Coumadin) doesn’t mean that he or she can’t have an MI. Coumadin isn’t an antiplatelet drug. It works on the extrinsic clotting pathway. Coumadin won’t inhibit platelet aggregation/clumping, which is why aspirin and clopidrogel (Plavix) are used in treating ACS.

In anemia, the body has a reduced quantity of red blood cells. One of the best ways to classify anemia is by the MCV, or mean corpuscular volume, which is expressed in femtoliters (fL). The MCV helps you think about the cause of the anemia and how to evaluate for it:

You can use the alphabetic classification system to evaluate melanoma, the most aggressive form of skin cancer. This guide helps you determine whether a skin lesion is malignant. The mnemonic is the first five letters of the English alphabet — A, B, C, D, and E. Here are the warning signs:

If you suspect melanoma, the next step is a skin biopsy.

Knowing what the APGAR score evaluates

An APGAR score measures how well a newborn is doing at 1 and 5 minutes after birth. The five factors you evaluate just happen to line up with the last name of the doctor, Dr. Virginia Apgar, who created the scoring system. Here are the APGAR factors: