By: Lisa Zimmer Hatch and Scott A. Hatch and Amy Hackney Blackwell and
Updated: 03-26-2016
From The Book: LSAT For Dummies 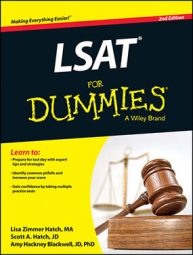 Make sure you’re familiar with terms that indicate quantities:

The main thing to remember with quantity terms is this: They’re usually used relative to one another. So a question that mixes the terms some, most, and all may expect you to compare the three. All is clear; it encompasses everything. Most is often less than all but more than some. Additionally, a characteristic that’s true of some, many, or most members of a group could be true of every member of a group. For example, it’s true that all the faces on Mt. Rushmore are of men, but it’s equally safe to say that some of the faces are of men. Consider a relative qualifier such as some, many, or most to provide you with a foundation for evaluation but not an absolute.

The verbs included in a question provide clues to the correct answer. Make sure you understand exactly what these reasoning actions require:

Lisa Zimmer Hatch, MA, and Scott A. Hatch, JD, have been preparing individuals to excel on standardized tests, gain admission to college, and secure careers since 1987. For nearly 30 years, they have provided their award-winning standardized test preparation throughout the world. Amy Hackney Blackwell, JD, PhD is a writer and former attorney. She holds a JD from the University of Virginia School of Law, an MA in history from Vanderbilt University, an AB from Duke University and a PhD from Clemson University.