A Systematic Approach to Logical Reasoning Questions on the LSAT

By: Lisa Zimmer Hatch and Scott A. Hatch and Amy Hackney Blackwell and
Updated: 03-26-2016
From The Book: LSAT For Dummies 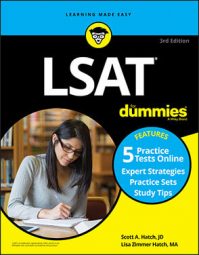 The LSAT is intended to make you think like a lawyer. What do lawyers do? They argue. They make statements and support them with evidence to convince a judge or jury that they’re right or that their opponents are wrong.

What don’t lawyers do? They don’t argue from personal conviction or emotion. They don’t base their arguments on their own feelings but on the facts and the laws. They don’t always get to choose the side they represent, which occasionally results in a lawyer’s having to support a side that she personally believes should lose.

In every logical reasoning argument, the author states some conclusion and attempts to support it with evidence. Your job is to identify this conclusion, figure out how the author is supporting it, and then determine why it’s successful or not.

To break down a logical reasoning question, follow these steps:

When you first read the question, don’t read all the answer choices; doing so takes way too much time and clutters your thinking. Instead, concentrate just on the information you need to answer the question. Then you can read the argument with the specific question in mind.

The argument paragraph usually isn’t too complicated, and therefore, you may be tempted to read it too quickly. Force yourself to read slowly and carefully so you don’t skim over the word or words that provide the keys to the argument.

Logical reasoning questions presume a fairly high level of reading proficiency and vocabulary; you have to be a skilled reader to understand the arguments well enough to work with them.

Now try to answer the question in your head before you read the answer choices. If you do, the correct answer may just jump right out at you.

Many students overlook this step, not realizing what a valuable tool anticipating the answer can be. Always try to concoct an answer before you check out the choices.

Read the answers and eliminate the wrong ones

Now read the answers. Having one obviously correct choice and four obviously wrong ones would be nice, but of course, the LSAT doesn’t work that way. All five choices seem plausible. The LSAT-makers want you to spend your time agonizing over the answer choices, fretting because two of them look right and you just can’t figure out which is which. Remember, though, there are never two right answers.

Even when you know which answer you want to find, reading through all the choices may take a little time. Logical reasoning answer choices can sometimes be nearly as long and complicated as the actual arguments. You know what to do, though: Read each answer quickly but carefully. Cross it off if you know for sure that it’s wrong; leave it alone if you think it may be right.

After reading all the answer choices, pick an answer. If you cross off four obviously wrong answers and find one obviously correct one, great. If you can’t decide between two answers, think about them for a little while, no more than 30 seconds or so. If you still can’t decide which one is right, pick one and move on.