By: Murray Shukyn and Achim K. Krull and
Updated: 03-26-2016
From The Book: GED Mathematical Reasoning Test For Dummies 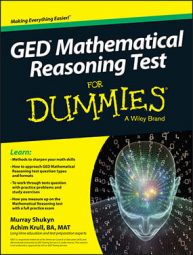 Uncertainty can generate significant test anxiety. To lessen the anxiety and boost your performance on the GED Mathematical Reasoning test, get a general idea of what’s covered on the test. To do well on the test, you need to be able to do the following: