By: Arthur Hsieh and
Updated: 03-26-2016
From The Book: EMT Exam For Dummies with Online Practice 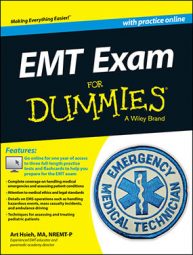 The National Registry of Emergency Medical Technicians (NREMT) began using computer adaptive testing (CAT) in January 2007. Prior to then, NREMT exams were paper based; an NREMT representative had to administer the test to a group of candidates. Answers were recorded by test-takers onto Scantron forms, which were collected by the NREMT representative and mailed to the NREMT. As you can imagine, this all took time to process and candidates had to wait a couple weeks for their results.

With CAT, the computer you use for the emergency medical technician (EMT) exam knows immediately whether your performance meets the minimum standard necessary to practice as an EMT. That information is transmitted to the NREMT, where staff confirm that you have completed all aspects of the application process. Your results are then posted to your online account. The result is that you often know within 24 to 36 hours whether you passed the exam; many candidates report knowing their results on the same day they take the exam!

While the reduced waiting time is great, what's even more important is the level of precision CAT has when evaluating your abilities. After you answer a test question of a specific difficulty level, the computer determines whether you answered it correctly. It then provides another question that is similar, higher, or lower in difficulty, depending on your response to the previous question. It continues this process as you go through the exam, constantly reevaluating your performance with each question.

The NREMT's CAT question bank contains thousands of questions that the computer can select from during your exam. It picks questions for content and difficulty based only on your performance. The questions become tailored to you; your test isn't likely to be exactly the same as another person's exam.

You may wonder how different tests for different people can be consistently judged by the computer. A testing principle called item response theory is the basis for CAT. By testing the candidate's answering ability per question, rather than per test, the computer can rapidly identify performance on the fly rather than waiting for the whole test to be run through.

Over time, the computer develops a statistical projection as to whether you'll continue to pass questions that meet minimum standards or fail them. When it reaches that point, there's no reason to continue answering questions, as the outcome will likely remain the same. This results in a test that is typically shorter than the original, paper-based exams, yet has more confidence in identifying whether your knowledge base is above standard. For most students, the length of the exam ranges between 70 and 120 questions.

Art Hsieh, MA, NREMT-P is a highly experienced paramedic, clinician, and educator, helping hundreds of students prepare for and pass the national examination process. He is the director of a collegiate paramedic academy and editorial advisor of EMS1.com.