Identifying the Types of Networks

In a peer-to-peer (P2P) network, all systems connected to the network can act as clients or servers. A client is a system that makes a request for a resource or service on the network; a server is the system providing the resource or service. In this type of networking environment, all systems are considered equal because they can all play the same roles on the network — either as client or server or as both client and server.

The recommended number of systems in a P2P network usually involves ten or fewer systems because of the lack of centralized administration. As a network administrator working in a P2P environment, you will constantly run from machine to machine to perform administrative tasks. Typically, a P2P network involves each system running a desktop operating system, such as Windows 8.1 to provide network functionality. 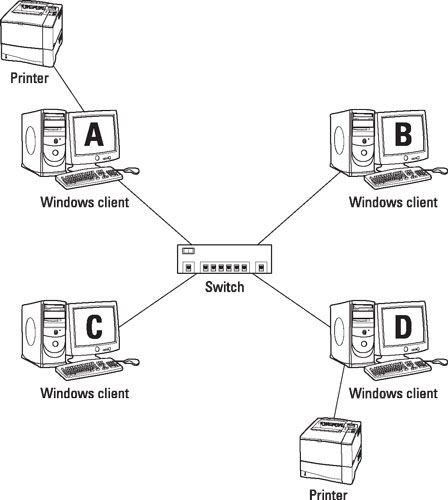 Notice that client A provides a network resource — a printer — as does client D. This shows that client A is acting as both a server and a client, which is the purpose of a P2P network.

Some examples of the administration you must perform on each system are creating user accounts on each computer and managing file and folder sharing from each system. Here, for example, if you want Bob to log on to client A, you would create the Bob account on client A. At the same time, if you want Sue to log on to client B, you would create the Sue account on client B. Because the Bob account doesn’t exist on client B, Bob can’t log on to that computer even though he might be able to access the files on client B from client A. This leads to a distributed administration model because your work is spread across multiple machines.

The major advantage of P2P networking is that you save money by not needing to purchase a central server, which can cost thousands of dollars in hardware and software. Too, with a P2P network, you also don’t have to purchase a separate network operating system (NOS). A NOS, required on a server-based network (discussed in the next section), is designed for networking services (such as Dynamic Host Configuration Protocol [DHCP], web, file, and print services) and allows the server to share its files and printers with clients on the network. The cost of the NOS, and the licenses to have clients connect to the server, is where a number of large companies spend most of their IT budget. Licensing is expensive!

The benefit of a client-server configuration is that you can leverage centralized administration by performing the bulk of your work on the one server. For example, if you need to create user accounts for each of the ten users, you create the ten accounts on the one server. Compare that with a P2P network, where one account is created on each system. As the administrator of this network, you create all shared directories on the server along with user accounts so that the server may verify the credentials of a client who attempts to log on to the network. All users on the network connect to this server to save and retrieve files.

Tighter security is another benefit of using a server-based networking model. Creating a more secure environment is easier with a server-based network because your resources and user accounts are not spread across multiple machines. You can focus on the server because it contains the files, folders, and user accounts. When a user logs on to the network, the logon request is sent to the server, which verifies that the username and password are valid. After a user is logged on, the server allows the user access to resources, such as files and printers, that the user has permission to use. this figure illustrates a server-based networking environment. 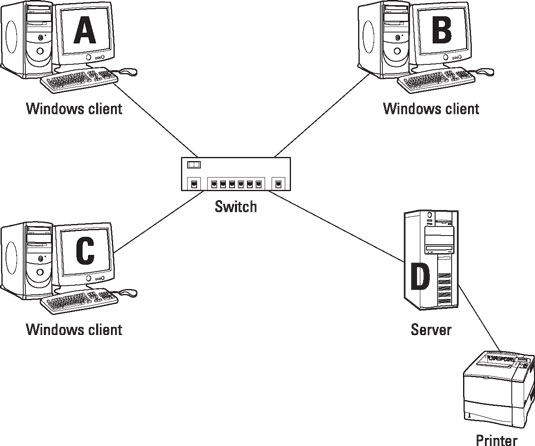 Notice that the client systems connect to the server to access the printer. In this environment, all systems have a defined role: They are either a client or a server — but not both.

The disadvantage of using a server-based environment is the cost of purchasing the server hardware and the NOS. When designing your networking model, make sure that you work with someone familiar with software licensing so you get the best bang for your buck!

When creating a network, you can install servers that provide a number of different types of functionality to the network. Following is a list of the common types of server roles that exist on networks today:

Servers are not the only types of devices that are found on networks. Networks may also contain a number of appliance devices that provide different functionality to the network. The following is a list of common appliances, or devices, connected to the network: