What You Should Know about Chemistry for the ASVAB

You will need to have a little chemistry facts under your sleeve for the ASVAB. Chemists study matter, and everything that has mass and takes up space — including your old Chevy that’s up on blocks and the mosquito buzzing around the room — is matter. All matter is made up of basic substances (building blocks) called elements.

Mass isn’t the same thing as weight. Weight has to do with the force that gravity exerts on mass. If you were in a gravity-free zone, you wouldn’t weigh anything, but you’d still be there, so you’d still exist and have mass.

Those mad scientists in the movies always seem to be chemists, but chemistry shouldn’t drive you crazy. Here’s a straightforward review of the chemistry you need to know for the General Science subtest.

The atom is the smallest part of an element that still retains the characteristics of that element. Every atom has particles — pieces of matter that are very, very small. Electrons are negatively charged particles that float around the atom’s nucleus, or core, which is made up of neutrons (particles with no charge) and protons (positively charged particles).

Atoms can combine with each other to form molecules. If those atoms are of two or more different elements, the molecule is called a compound. A compound can have very different properties from the elements that make it up. For example, table salt, which is mostly harmless, consists of two lethal elements — sodium and chlorine. But when combined, these elements make a compound that people ingest every day, salt.

Sitting down at the periodic table

The periodic table (also known as the table of elements) classifies all elements, because scientists love to classify things. Elements are listed according to their atomic numbers (number of protons) and are arranged into families of similar elements. 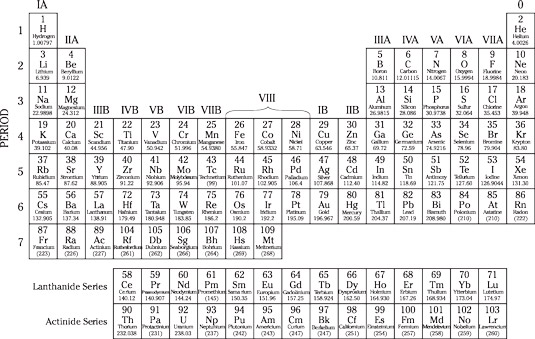 Unlike physical changes, chemical reactions create new molecules. For example, when iron rusts, a chemical change occurs. The rust isn’t the same molecule as the iron.

In a chemical reaction, two kinds of substances are present: