ASVAB Mechanical Comprehension Subtest: The Forces of the Universe 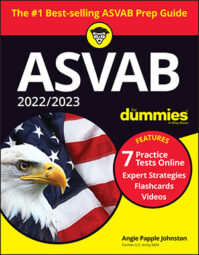 Explore Book Buy On Amazon
You will want to have a basic understanding of forces for the ASVAB. By applying force (a push or pull), you can open the door or close it, speed it up (slam it) or slow it down (catch it before it slams), or make it change direction (push it shut when the wind blows it open).

In physics, applying force allows changes in the velocity (the speed and direction) of an object. A change in velocity is known as acceleration. Here’s the mathematical formula to determine force:

The basics of action and reaction 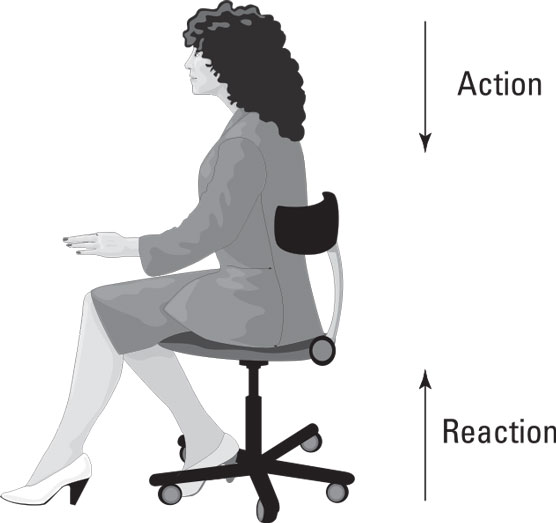 An example of action and reaction forces.

This force can also be used to describe how a motorboat moves through the water. As the propellers turn, they push the water behind the boat (action). The water reacts by pushing the boat forward (reaction).

Forces are vector quantities. That means they have both a magnitude (size) and a direction associated with them. Forces applied in the same direction as other forces increase the total force, and forces that move in opposite directions reduce the total force. In general, an object can be acted on by several different forces at any one time.

Under pressure: Spreading out the force

Pressure is a measurement of force over an area. Pressure is usually measured in pounds per square inch (psi). The formula for deriving pressure is

Ever wonder how a person can lie on a bed of nails? The answer involves elementary physics. His or her body rests evenly on hundreds of nails; therefore, no individual nail exerts a great amount of pressure against the skin. Have you ever seen someone stand on a bed of nails? It’s unlikely because more pressure is on the feet, and the nails would puncture the feet.

Here are some of the forces that act on objects:

Friction: Resisting the urge to move

When one surface (such as a floor) resists the movement of another surface (the bottom of a piano), the result is frictional resistance. (This friction isn’t like resisting orders to cut the grass. That type of resistance may cause friction between you and your dad, but I’m talking about a different kind of resistance here.)

In order to perform work — that is, to get an object to move in the direction you’re pushing or pulling — sometimes you have to overcome friction by applying more force. For example, when you’re moving a piano across a smooth, vinyl floor, little friction is produced, so the amount of force required to push the piano comes from the piano’s weight and the very minor friction produced by the smooth floor. But when you’re moving a piano across a carpeted floor, more friction is produced, so you have to push harder to move the same piano the same distance.

You can decrease friction by using a lubricant. Oil, grease, and similar materials reduce friction between two surfaces. So theoretically, if you oil the bottom of a piano, it’s easier to move! (Oiling the bottom of your piano isn’t recommended — for reasons involving the appearance of your floor and piano.)

Gravity: What goes up must come down

Sir Isaac Newton invented gravity in 1687 when he failed to pay attention while sitting under a tree and got bonked on the noggin by an apple. Before that, gravity didn’t exist, and everyone just floated around. Okay, I’m kidding. Isaac Newton didn’t invent gravity. But the famous mathematician was the first to study gravity seriously, and he came up with the theory (now a scientific law) of how gravity works.

Note that the force of gravity acting on an object is equal to the weight of the object. Of course, other planets have lesser or greater masses than Earth, so the weight of objects on those planets will be different.

For an object to really lose weight, it must be far away from Earth (or any other large body). When an object is far enough away from these bodies that it experiences practically no gravitational pull from them, it’s said to experience weightlessness — just like the astronauts you see on TV.

Gravity pulls objects downward toward the center of Earth, so the old saying “what goes up must come down” is appropriate when discussing gravity. If you fire a bullet straight up into the air, it will travel (overcoming the force of gravity) until it reaches its farthest or highest point, and then it will fall. 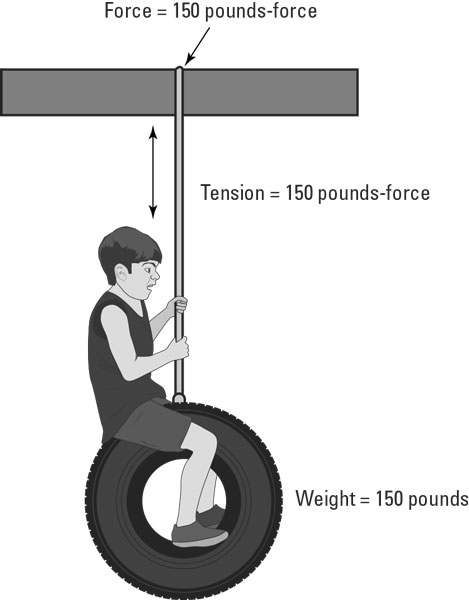 An example of tension force.

Elastic recoil: The trampoline of physics

Liquids and gases don’t have a specific shape, but solid matter does. Solids are perfectly happy with the way they look and resist changes in shape. If you exert a force on a solid shape, it responds by exerting a force in the opposite direction. This force is called elastic recoil.

Take a look at the following figure. The cat is standing on a board suspended on two blocks. While the board bends, the cat can feel the force of the board trying to regain its original shape. If the cat steps off the board, the board will spring back to its normal state.

The concept of elastic recoil.

Angie Papple Johnston joined the U.S. Army in 2006 as a CBRN specialist. Currently, she's the CBRN noncommissioned officer-in-charge of an aviation battalion in Washington, D.C. Rod Powers served more than 20 years in the U.S. Air Force and retired as a first sergeant.