Because you can easily break this potential down in the x, y, and z directions, you can break the wave function down that way, too, as you see here:

Solving for the wave function gives you the following normalized result in rectangular coordinates:

The energy levels also break down into separate contributions from all three rectangular axes:

And solving for E gives you this equation:

Clearly, trying to stuff this kind of problem into a rectangular-coordinates kind of solution is only asking for trouble, because although you can do it, it involves lots of sines and cosines and results in a pretty complex solution. A much better tactic is to solve this kind of a problem in the natural coordinate system in which the potential is expressed: spherical coordinates.

The following figure shows the spherical coordinate system along with the corresponding rectangular coordinates, x, y, and z. 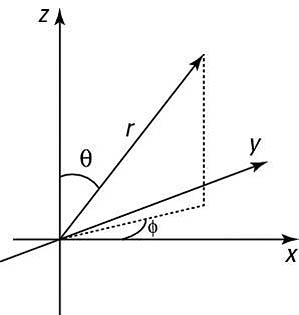 In the spherical coordinate system, you locate points with a radius vector named r, which has three components: