is infinitesimal in size, and it stays the same between the two frames. But the angles that make up

the scattering angle, vary when you translate between frames. You get to take a look at how that works now, relating the lab differential cross section:

to the center-of-mass differential cross section:

In the lab frame,

And in the center-of-mass frame,

the following equation is true:

Putting that equation with the equations for the lab frame and the center-of-mass frame, you have

Because you have cylindrical symmetry here, 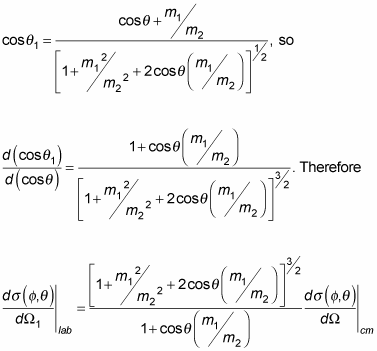 You can also show that