How Physicists Solved the Photoelectric Effect of Light

The photoelectric effect was one of many experimental results that made up a crisis for classical physics around the turn of the 20th century. It was also one of Einstein’s first successes, and it provides proof of the quantization of light. Here’s what happened. 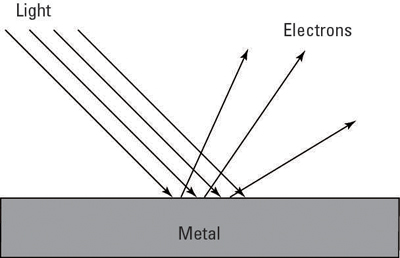 When you shine light onto metal, as the figure above shows, you get emitted electrons. The electrons absorb the light you shine, and if they get enough energy, they’re able to break free of the metal’s surface. According to classical physics, light is just a wave, and it can exchange any amount of energy with the metal. When you beam light on a piece of metal, the electrons in the metal should absorb the light and slowly gather up enough energy to be emitted from the metal. The idea was that if you were to shine more light onto the metal, the electrons should be emitted with a higher kinetic energy. And very weak light shouldn’t be able to emit electrons at all, except in a matter of hours.

But that’s not what happened — electrons were emitted as soon as someone shone light on the metal. In fact, no matter how weak the intensity of the incident light (and researchers tried experiments with such weak light that it should have taken hours to get any electrons emitted), electrons were emitted. Immediately. 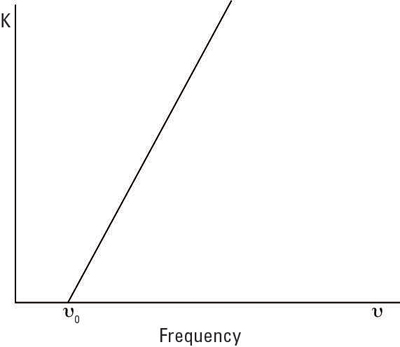 Kinetic energy of emitted electrons versus frequency of the incident light.

Experiments with the photoelectric effect showed that the kinetic energy, K, of the emitted electrons depended only on the frequency — not the intensity — of the incident light, as you can see in this figure.

The results were hard to explain classically, so entered Einstein. This was the beginning of his heyday, around 1905. Encouraged by the success of Max Planck, Einstein postulated that not only were oscillators quantized but so was light — into discrete units called photons. Light, he suggested, acted like particles as well as waves.

So in this scheme, when light hits a metal surface, photons hit the free electrons, and an electron completely absorbs each photon. When the energy,

of the photon is greater than the work function of the metal, the electron is emitted. That is,

where W is the metal’s work function and K is the kinetic energy of the emitted electron. Solving for K gives you the following:

The work function can be expressed in terms of the threshold frequency,

You can also write this in terms of the threshold frequency this way:

So apparently, light isn’t just a wave; you can also view it as a particle, the photon. In other words, light is quantized.