Finding the Schrödinger Equation for the Hydrogen Atom

Hydrogen atoms are composed of a single proton, around which revolves a single electron. You can see how that looks in the following figure. 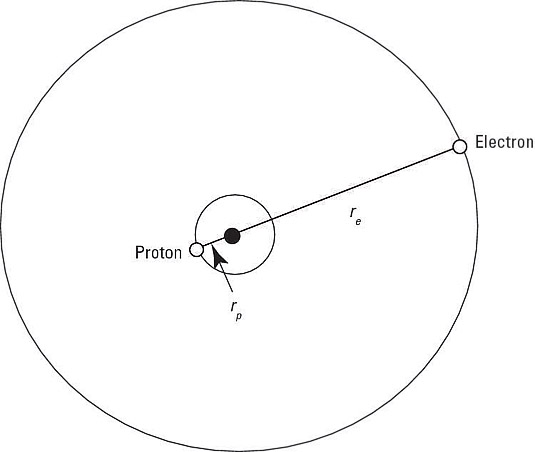 So what does the Schrödinger equation, which will give you the wave equations you need, look like? Well, it includes terms for the kinetic and potential energy of the proton and the electron. Here's the term for the proton's kinetic energy:

The Schrödinger equation also includes a term for the electron's kinetic energy:

is the electron and proton's wave function.

The electrostatic potential energy, V(r), for a central potential is given by the following formula, where r is the radius vector separating the two charges:

As is common in quantum mechanics, you use the CGS (centimeter-gram-second) system of units, where

Note that r = re – rp, so the preceding equation becomes

which gives you this Schrödinger equation: