Applying the Spherical Bessel and Neumann Functions to a Free Particle

In quantum physics, you can apply the spherical Bessel and Neumann functions to a free particle (a particle which is not constrained by any potential). The wave function in spherical coordinates takes this form:

gives you the spherical harmonics. The problem is now to solve for the radial part, Rnl(r). Here's the radial equation:

For a free particle, V(r) = 0, so the radial equation becomes

The way you usually handle this equation is to substitute

and because you have a version of the same equation for each n index it is convenient to simply remove it, so that Rnl (r) becomes

This substitution means that

and the spherical Neumann functions

Here's what the first few iterations of

Here are the first few iterations of 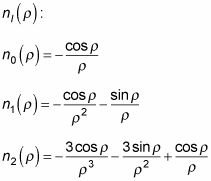