The Principle of Conservation of Mechanical Energy

Physics I For Dummies, 3rd Edition

In physics, if you know the kinetic and potential energies that act on an object, then you can calculate the mechanical energy of the object. Imagine a roller coaster car traveling along a straight stretch of track. The car has mechanical energy because of its motion: kinetic energy. Imagine that the track has a hill and that the car has just enough energy to get to the top before it descends the other side, back down to a straight and level track (see the figure). What happens? 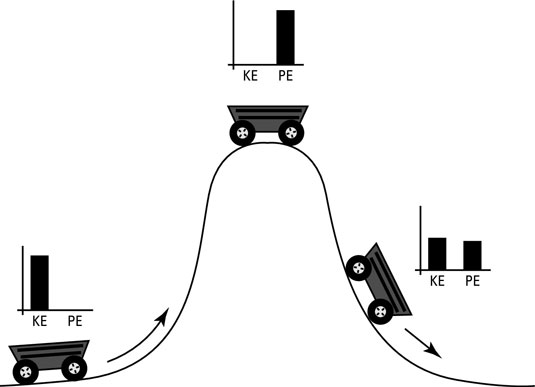 The roller coaster car’s total mechanical energy, which is the sum of its kinetic and potential energies, remains constant at all points of the track (ignoring frictional forces). The combination of the kinetic and potential energies does vary, however. When the only work done on an object is performed by conservative forces, its mechanical energy remains constant, whatever motions it may undergo.

Say, for example, that you see a roller coaster at two different points on a track — Point 1 and Point 2 — so that the coaster is at two different heights and two different speeds at those points. Because mechanical energy is the sum of the potential energy

the total mechanical energy at Point 1 is

At Point 2, the total mechanical energy is

What’s the difference between ME2 and ME1? If there’s no friction (or another nonconservative force), then ME1 = ME2, or

Another way of rattling off the principle of conservation of mechanical energy is that at Point 1 and Point 2,

You can simplify that mouthful to the following:

where ME is the total mechanical energy at any one point. In other words, an object always has the same amount of energy as long as the net work done by nonconservative forces is zero.

You can cancel out the mass, m, in the previous equation, which means that if you know three of the values (heights and velocities), you can solve for the fourth:

Steven Holzner was an award-winning author of more than 130 books, of which more than 2 million copies have been sold. His books have been translated into 23 languages. He served on the Physics faculty at Cornell University for more than a decade, teaching both Physics 101 and Physics 102. Holzner received his doctorate in physics from Cornell and performed his undergraduate work at Massachusetts Institute of Technology, where he also served as a faculty member.