Calculating Tangential Velocity on a Curve

When an object moves in a circle, if you know the magnitude of the angular velocity, then you can use physics to calculate the tangential velocity of the object on the curve.

Given an angular velocity of magnitude

the tangential velocity at any radius is of magnitude

The idea that the tangential velocity increases as the radius increases makes sense, because given a rotating wheel, you’d expect a point at radius r to be going faster than a point closer to the hub of the wheel. 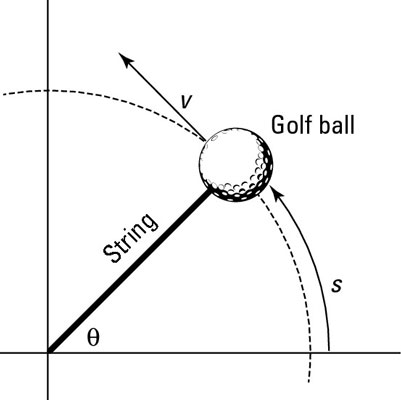 A ball in circular motion has angular speed around the circle.

Take a look at the figure, which shows a ball tied to a string. The ball is whipping around with angular velocity of magnitude

You can easily find the magnitude of the ball’s velocity, v, if you measure the angles in radians. A circle has

the complete distance around a circle — its circumference — is

where r is the circle’s radius. In general, therefore, you can connect an angle measured in radians with the distance you cover along the circle, s, like this:

where r is the radius of the circle. Now, you can say that v = s/t, where v is magnitude of the velocity, s is the distance, and t is time. You can substitute for s to get

Now you can find the magnitude of the velocity. For example, say that the wheels of a motorcycle are turning with an angular velocity of

so just plug in the numbers:

Converting 27 meters/second to miles/hour gives you about 60 mph.