Here’s a list of some important physics formulas and equations to keep on hand — arranged by topic — so you don’t have to go searching to find them.

Equations of angular motion are relevant wherever you have rotational motions around an axis. When the object has rotated through an angle of θ with an angular velocity of ω and an angular acceleration of α, then you can use these equations to tie these values together.

You must use radians to measure the angle. Also, if you know that the distance from the axis is r, then you can work out the linear distance traveled, s, velocity, v, centripetal acceleration, ac, and force, Fc. When an object with moment of inertia, I (the angular equivalent of mass), has an angular acceleration, α, then there is a net torque Στ.

A heat engine takes heat, Qh, from a high temperature source at temperature Th and moves it to a low temperature sink (temperature Tc) at a rate Qc and, in the process, does mechanical work, W. (This process can be reversed such that work can be performed to move the heat in the opposite direction — a heat pump.) The amount of work performed in proportion to the amount of heat extracted from the heat source is the efficiency of the engine. A Carnot engine is reversible and has the maximum possible efficiency, given by the following equations. The equivalent of efficiency for a heat pump is the coefficient of performance. 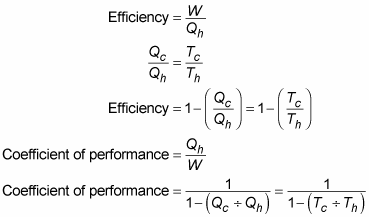 A volume, V, of fluid with mass, m, has density, ρ. A force, F, over an area, A, gives rise to a pressure, P. The pressure of a fluid at a depth of h depends on the density and the gravitational constant, g. Objects immersed in a fluid causing a mass of weight, Wwater displaced, give rise to an upward directed buoyancy force, Fbuoyancy. Because of the conservation of mass, the volume flow rate of a fluid moving with velocity, v, through a cross-sectional area, A, is constant. Bernoulli’s equation relates the pressure and speed of a fluid. 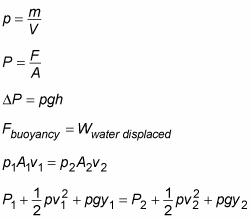 The rotational equivalent of mass is inertia, I, which depends on how an object’s mass is distributed through space. The moments of inertia for various shapes are shown here:

When an object at position x moves with velocity, v, and acceleration, a, resulting in displacement, s, each of these components is related by the following equations: 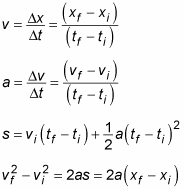 Particular kinds of force result in periodic motion, where the object repeats its motion with a period, T, having an angular frequency, ω, and amplitude, A. One example of such a force is provided by a spring with spring constant, k. The position, x, velocity, v, and acceleration, a, of an object undergoing simple harmonic motion can be expressed as sines and cosines.

The random vibrational and rotational motions of the molecules that make up an object of substance have energy; this energy is called thermal energy. When thermal energy moves from one place to another, it’s called heat, Q. When an object receives an amount of heat, its temperature, T, rises.

The heat required to cause a change in temperature of a mass, m, increases with a constant of proportionality, c, called the specific heat capacity. In a bar of material with a cross-sectional area A, length L, and a temperature difference across the ends of ΔT, there is a heat flow over a time, t, given by these formulas:

The pressure, P, and volume, V, of n moles of an ideal gas at temperature T is given by this formula, where R is the gas constant:

In an ideal gas, the average energy of each molecule KEavg, is in proportion to the temperature, with the Boltzman constant k:

When a force, F, moves an object through a distance, s, which is at an angle of Θ,then work, W, is done. Momentum, p, is the product of mass, m, and velocity, v. The energy that an object has on account of its motion is called KE.