String Theory: Travel through a Wormhole

In a solution known to string theory as an Einstein-Rosen bridge (shown in this figure and more commonly called a wormhole), two points in space-time could be connected by a shortened path. In some special cases, a wormhole may actually allow for time travel. Instead of connecting different regions of space, the wormhole could connect different regions of time! 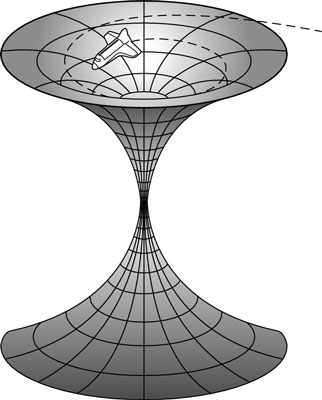 Wormholes were studied by Albert Einstein and his pupil Nathan Rosen in 1935. (Ludwig Flamm had first proposed them in 1916.) In this model, the singularity at the center of a black hole is connected to another singularity, which results in a theoretical object called a white hole.

While the black hole draws matter into it, a white hole spits matter out. Mathematically, a white hole is a time-reversed black hole. Because no one’s ever witnessed a white hole, it’s probable that they don’t exist, but they are allowed by the equations of general relativity and haven’t been completely ruled out yet.

An object falling into a black hole could travel through the wormhole and come out the white hole on the other side in another region of space. Einstein showed that there were two flaws with using a wormhole for time travel:

Then, in 1963, New Zealand mathematician Roy Kerr calculated an exact solution for Einstein’s field equations representing a Kerr black hole. The special feature of a Kerr black hole is that it rotates. So far as scientists know, all objects in the universe rotate, including stars, so when the star collapses into a black hole, it’s likely that it too will rotate.

In Kerr’s solution, it’s actually possible to travel through the rotating black hole and miss the singularity at the center, so you could come out the other side. The problem is, again, that the black hole would probably collapse as you’re going through it.

Assuming physicists could get a wormhole to be large and stable enough to pass through, probably the simplest time machine that could use this method was theorized by Kip Thorne of the California Institute of Technology. Consider a wormhole with the following features:

Now assume that a pair of twins, named Maggie and Emily, are standing at either end of the wormhole. Maggie is next to the wormhole on Earth in 2009, while Emily is on the spaceship (also, for the moment, in 2009). She goes on a little jaunt for a few days, traveling at nearly the speed of light, but when she comes back, thousands of years have passed on Earth due to time dilation (she is now in 5909).

On Maggie’s side of the wormhole (still 2009), only a few days have passed. In fact, the twins have regularly been discussing the strange sights that Emily has witnessed over the few days of her journey. Emily (in 5909) is able to go through the wormhole to Maggie’s location (in 2009) and, voilà, she has traveled back in time thousands of years!

In fact, now that Emily’s gone to the trouble of setting up the portal, Maggie (or anyone else) could just as easily travel from 2009 to 5909 (or vice versa) just by stepping through it.

Since Thorne’s model, there have been several wormhole-based time travel scenarios developed by physicists. In fact, some physicists have shown that if a wormhole exists, it has to allow travel in time as well as space.