The problem of extra dimensions continued to plague string theory, but these were solved by introducing the idea of compactification, in which the extra dimensions curl up around each other, growing so tiny that they’re extremely hard to detect.

The mathematics about how this might be achieved had already been developed in the form of complex Calabi-Yau manifolds, an example of which is shown in this figure. The problem is that string theory offers no real way to determine exactly which of the many Calabi-Yau manifolds is right! 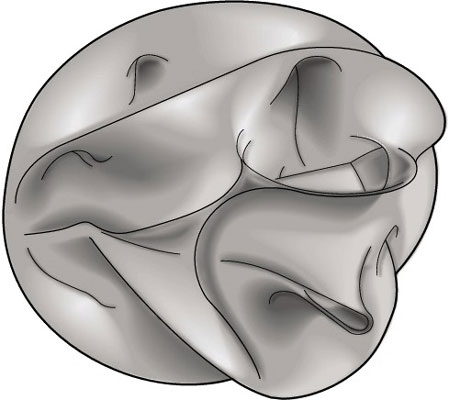 When the extra dimensions were first discovered in the 1970s, it was clear that they must be hidden in some way. After all, we certainly don’t see more than three spatial dimensions.

One suggestion was the one that had been proposed by Kaluza and Klein a half century earlier: The dimensions could be curled up into a very small size.

Early attempts to curl up these extra dimensions ran into problems because they tended to retain the symmetry between left- and right-handed particles (called parity by physicists), which isn’t always retained in nature. This violation is crucial in understanding the operation of the weak nuclear force.

For string theory to work, there had to be a way to compactify the extra six dimensions while still retaining a distinction between the left-handed and right-handed particles.

In 1985, the Calabi-Yau manifolds (created for other purposes years earlier by mathematicians Eugenio Calabi and Shing-Tung Yau) were used by Edward Witten, Philip Candelas, Gary Horowitz, and Andrew Strominger to compactify the extra six space dimensions in just the right way. These manifolds not only preserved the handedness of the particles, but they also preserved supersymmetry just enough to replicate certain aspects of the Standard Model.

One benefit of the Calabi-Yau manifolds was that the geometry of the folded dimensions gives rise to different types of observable particles in our universe. If the Calabi-Yau shape has three holes (or rather higher-dimensional analogs of holes), three families of particles will be predicted by the Standard Model of particle physics.

Obviously, by extension, a shape with five holes will have five families, but physicists are only concerned with the three families of particles that they know exist in this universe.

Unfortunately, there are tens of thousands of possible Calabi-Yau manifolds for six dimensions, and string theory offers no reasonable means of determining which is the right one. For that matter, even if physicists could determine which one was the right one, they’d still want to answer the question of why the universe folded up the extra six dimensions in that particular configuration.

When Calabi-Yau manifolds were first discovered, it was hoped by some vocal members of the string theory community that one specific manifold would fall out as the right one. This hasn’t proved to be the case, and this is what many string theorists would have expected in the first place — that the specific Calabi-Yau manifold is a quantity that has to be determined by experiment.

In fact, it’s now known that some other geometries for folded spaces can also maintain the needed properties.