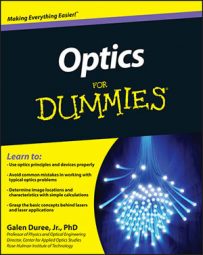 Diffraction is light's response to having something mess with its path, so diffraction occurs only when something blocks part of the wavefront. Diffraction is the phenomenon where light bends around an obstacle (this bending is not due to refraction, because the material doesn't change as refraction requires). The following equations cover the most common situations involving diffraction, including resolution.

Galen Duree, Jr., PhD, is Professor of Physics and Optical Engineering at Rose-Hulman Institute of Technology in Indiana, where he is also the Director of the Center for Applied Optics Studies. Duree jointly established the Ultrashort Pulse Laser Laboratory at RHIT and continues to work with the Navy.