Newton’s third law of motion is famous, especially in wrestling and drivers’ ed circles, but you may not recognize it in all its physics glory: “Whenever one body exerts a force on a second body, the second body exerts an oppositely directed force of equal magnitude on the first body.”

The more popular version of this, which you’ve probably heard many times, is “For every action, there’s an equal and opposite reaction.” But for physics, it’s better to express the originally intended version, in terms of forces, not actions (which can apparently mean everything from voting trends to temperature forecasts!).

Here’s a real-world example to show you how Newton’s third law of motion works. Say that you’re in your car, speeding up with constant acceleration. To do this, your car has to exert a force against the road; otherwise, the car wouldn’t be accelerating. And the road has to exert the same force on your car. You can see what this looks like, tire-wise, in the figure. 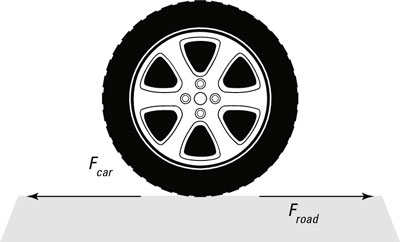 Equal forces acting on a car tire and the road during acceleration.

Similarly, when a hockey player slaps a puck, the puck accelerates away from the spot of contact, and so does the hockey player. If hockey pucks weighed 1,000 pounds — with a mass of about 31 slugs, or 450 kilograms — you’d notice this effect much more; in fact, the puck wouldn’t move much at all, but the player would hurtle off in the opposite direction after striking it.