General Relativity and Wormholes: Doorways in Space and Time

The first application of general relativity to time travel was by the Scottish physicist W. J. van Stockum in 1937. Van Stockum imagined (in mathematical form, because that’s how physicists imagine things) an infinitely long, extremely dense rotating cylinder, like an endless barbershop pole. The dense cylinder actually drags space-time with it, creating a space-time whirlpool.

In van Stockum’s situation, you could fly up to the cylinder in a spaceship and set a course around the cylinder and arrive back at a point in time before you arrived at the cylinder.

Another theory about time travel was proposed in 1949 by Einstein’s colleague, the mathematician Kurt Gödel, who considered the situation where all of space — the entire universe itself — was actually rotating. You might ask if everything is rotating how we’d ever know it. Well, it turns out that if the universe were rotating, according to general relativity, then we’d see laser beams curve slightly as they move through space (beyond the normal gravitational lensing, where gravity bends light beams).

The solution that Gödel arrived at was disturbing, because it allowed time travel. It was possible to create a path in a rotating universe that ended before it began. In Gödel’s rotating universe, the universe itself could function as a time machine.

So far, physicists haven’t found any conclusive evidence that our universe is rotating. In fact, the evidence points overwhelmingly toward the idea that it’s not. But even if the universe as a whole doesn’t rotate, objects in it certainly do.

Taking a shortcut through space and time with a wormhole

In a solution called an Einstein-Rosen bridge (shown in the figure below and more commonly called a wormhole), two points in space-time could be connected by a shortened path. In some special cases, a wormhole may actually allow for time travel. Instead of connecting different regions of space, the wormhole could connect different regions of time! 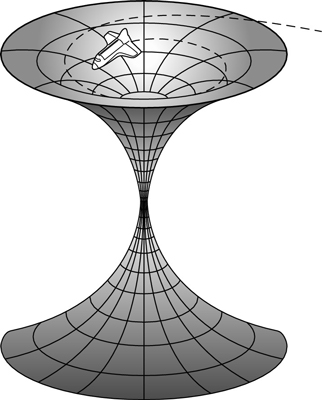 Traveling into a wormhole could get you from one location in space-time to another.

Assuming physicists could get a wormhole to be large and stable enough to pass through (which many mathematicians and physicists believe is impossible), consider it to have the following features:

Now assume that a pair of twins, Maggie and Emily, are standing at either end of the wormhole. Maggie is next to the wormhole on Earth in 2010, while Emily is on the spaceship (also, for the moment, in 2010). She goes on a little jaunt for a few days, traveling at nearly the speed of light, but when she comes back, thousands of years have passed on Earth due to time dilation (she is now in 5910).

On Maggie’s side of the wormhole (still 2010), only a few days have passed. In fact, the twins have regularly been discussing the strange sights that Emily has witnessed over the few days of her journey. Emily (in 5910) is able to go through the wormhole to Maggie’s location (in 2010) and, voilà, she has traveled back in time thousands of years!

In fact, now that Emily’s gone to the trouble of setting up the portal, Maggie (or anyone else) could just as easily travel from 2010 to 5910 (or vice versa) just by stepping through it.

There have been several wormhole-based time travel scenarios developed by physicists. In fact, some physicists have shown that if a wormhole exists, it has to allow travel in time as well as space.

The problem with using wormholes to travel in space or time is that they are inherently unstable. When a particle enters a wormhole, it creates fluctuations that cause the structure to collapse in upon itself. There are theories that a wormhole could be held open by some form of negative energy, which represents a case where the energy density (energy per volume) of space is actually negative.

Under these theories, if a sufficient quantity of negative energy could be employed, it might continue to hold the wormhole open while objects pass through it. This would be an absolute necessity for any of the previously discussed theories that allow a wormhole to become a time portal, but scientists lack a real understanding of how to get enough negative energy together, and most think it’s an impossible task.

In some models, it may be possible to relate dark energy and negative energy (both exhibit a form of repulsive gravity, even though dark energy is a positive energy), but these models are highly contrived. The good news (if you see possible time travel as good news) is that our universe appears to have dark energy in abundance, although the problem is that it looks like it’s evenly distributed throughout the universe.

Trying to find any way to store negative energy and use it to sustain a wormhole’s stability is far beyond current technology (if it’s even possible at all). String theory can provide potential sources of negative energy, but even in these cases, there’s no guarantee stable wormholes can occur.