By: Frank Amthor and
Updated: 09-21-2022
From The Book: Neuroscience For Dummies

Explore Book Buy On Amazon
The mapping of skin receptors to a specific area of neocortex illustrates one of the most fundamental principles of brain organization, cortical maps. The projection from the thalamus is orderly in the sense that receptors on nearby parts of the skin project to nearby cortical neurons. The figure shows a representation of the skin map on the somatosensory cortex. 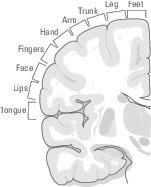 The skin map on the somatosensory cortex.

The fundamental idea about a given area of cortex being devoted to receptors in a given skin area is that activity in this area of cortex is necessary for the perception of the skin sense (along with other parts of the brain). You perceive activity in that bit of cortex area as a skin sensation not because that area has some special skin perceiving neurons, but because it receives inputs from the skin and has outputs that connect to memories of previous skin sensation and other associated sensations.

In other words, the perception produced by activity in this and other areas of cortex is a function of what neural input goes to it and where the outputs of that area of cortex go.

This skin map on the cortex is called a homunculus, which means "little man." However, the surface area of the somatosensory cortex onto which the skin receptors project is not really a miniature picture of the body; it is more like a band or strip, as established in the studies by Canadian neurosurgeon Wilder Penfield.

Also note that some areas of the body, such as the hands and fingers, are located in the cortex map close to areas such as the face that are actually quite distant, body-wise. Some researchers suggest that the phantom limb feelings (including pain) that sometime occur after an amputation may occur because some neural projections from the face invade the part of the cortex that was being stimulated by the limb and cause sensations to be perceived as being located there, even when the limb is gone.