2 Mechanisms That Stabilize Your Body's Joints to Avoid Injuries

By: Steve Glass and Brian Hatzel and Rick Albrecht and
Updated: 03-26-2016
From The Book: Kinesiology For Dummies 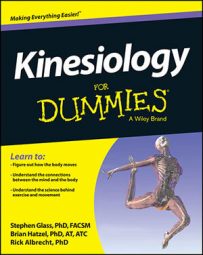 Maintaining physical stability takes more than a single structure working in isolation to provide joint support. Instead, lots of parts — muscles, tendons, ligaments, bones, and other soft tissues — all have to work together to produce a stable joint. Stable joints help you avoid injury, such as shoulder dislocations and ACL sprains.

The factors that help maintain stability are usually broken up into separate categories: the active mechanisms (the muscles) and the passive mechanisms (pretty much everything else, like the ligaments, bone shapes, cartilage, joint capsule, and so on). The components from each type of mechanism must communicate with each other to provide stability.

If the muscles (active restraints) don’t fire as they should or are weak, stability is compromised, and if the ligaments, tendons, and so on (passive restraints) have been compromised, injury may result as well. Someone who has had strength issues in the muscles or who has suffered from a previous ligament injury is at increased risk for injury.

The active restraint mechanism (the muscles) is the contractile component of joint stability. These muscles act on and around a particular set of structures (your joints). Not only do you rely on the muscles that act on a joint to provide the forces needed to move or propel objects, but you also rely on them to resist forces that could potentially cause injury.

The structures that make up the passive restraint mechanism don’t contract and consist of structural restraints (like ligaments, cartilage, bone shape, and so on) and components — called mechanoreceptors — whose job it is to detect neurological information. Mechanoreceptors are specialized sensory organs that respond to mechanical stimuli, such as tension, pressure, and displacement. Together, both the structural components of the passive restraint mechanism and the mechanoreceptors enable your body to collect the information it needs related to movement.

The mechanoreceptors are found in muscle, tendons, bone, ligaments, and other soft tissues. When these structures are affected by an activity, the information is shared and either triggers a reflex response or causes the brain to create a new motor plan.

Because these receptors have to be physically changed to respond, they are susceptible to injured tissue. To understand this, imagine that you sprained a ligament in the past. Now, as a result of that sprain, your ligament is a bit longer. The next time you stumble, your ankle will actually twist farther before the mechanoreceptor is activated and recognizes the situation.