Boy, put biology, geology, and chemistry together, and you get biogeochemical! When you talk about the "circle of life," the circle to which you are referring is a biogeochemical cycle. The plants and animals that live and then die are the bio part; the earth that they decompose into comprises the geo part; and the process by which organic matter returns to the chemical elements in the earth is explained by the chemical part. There are four biogeochemical cycles, and each of them returns to the earth important elements that are required in living organisms.

Plants absorb water from soil, and animals drink water or eat animals, which are made mostly of water. When plants go through the process of transpiration (that's when water evaporates from a leaf and more water is pulled up from the roots of the plant and out through the cells on the surface of the leaf), they give off water. When animals create perspiration, they release water, which is evaporated into the atmosphere. Water also is released from plants and animals as they decompose. Decomposing tissue becomes dehydrated, which is what causes the dried-out tissues to break down and fall off into the soil.

You can tell that by its name; triphosphate indicates that it contains three molecules of phosphate, which requires phosphorus.

DNA and RNA, the genetic molecules present in every living thing, have phosphate bonds holding them together, so they require phosphorus, too, as does bone tissue. Plants absorb inorganic phosphate from the soil. When animals consume plants or other animals, they acquire the phosphorus that was present in their meal. Phosphorus is excreted through the waste products created by animals, and it is released by decomposing plants and animals. When phosphorus gets returned to the soil, it can be absorbed again by plants, or it becomes part of the sediment layers that eventually form rocks. As rocks erode by the action of water, phosphorus is returned to water and soil.

Because amino acids build proteins, nitrogen is pretty important. Nitrogen also is present in the nucleic acids DNA and RNA. Life could not go on without nitrogen. 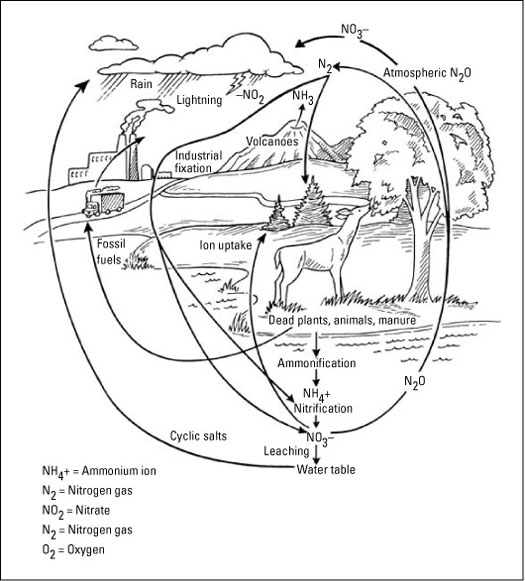 René Fester Kratz, PhD, teaches biology at Everett Community College. Kratz has a doctorate in botany from the University of Washington. She works with other scientists and K–12 teachers to develop science curricula that align with national learning standards and the latest research on human learning.