The Importance of Documenting the Procedure Used to Preserve Crime Scenes

While a crime scene is being processed, everything that transpires is documented in notes, sketches, and photographs, and perhaps even videoed. This documentation includes not only the scene and the evidence, but also the surrounding area, particularly the perpetrator's possible entry and exit points.

A designated note taker keeps an accurate account of all activities in and around the crime scene. Sometimes a tape recorder is used, and the verbal notes are transcribed later. Regardless of how they're taken, the notes must be detailed, including an overall description of the scene; an accurate list describing what each piece of evidence is; when, where, and by whom it was found; and who transported it to the crime lab. The note taker also identifies and comments on every photo that is taken at the scene.

Photographs of the scene need to be taken as soon as possible so that they show the scene preserved in an unaltered condition. Photos must be taken prior to moving or removing any evidence (or the body, if there is one). Taking several overview images of the area is a good idea, and if the scene happens to be outdoors, pictures of surrounding areas should be taken from multiple angles and points of view. Close-ups of each item of evidence, and, in murder cases, any and all visible injuries to the corpse (while it's still at the crime scene), are critical.

Video possesses the advantage of including sound so that comments can be preserved. But whenever video is used, still photos nevertheless need to be taken because they offer much greater detail resolution.

Photos also are taken of any injured parties, including the suspect. Full-body and close-up shots of any injuries are obtained. Whether these pictures are taken at the scene or at the hospital (or even in the operating room) depends upon the nature of the injuries. Bumps, bruises, and scratches can be photographed at the scene, but photos of injuries such as gunshot and knife wounds probably have to wait until the victim is transported to the hospital.

In photographs where the size of the object or evidence being recorded is important, the photographer includes a point of reference. A ruler is ideal, but another common object, such as a cigarette pack, a ballpoint pen, or a car key, for example, works in a pinch.

Sketches also are extremely important, because they show the relationship of each item of evidence to other items or to the body. Each piece of evidentiary material is mapped, or located by its distance from two fixed points, such as a wall, a lamppost, or a sidewalk. Doing so provides exact graphic coordinates of each item.

Sketches made at the scene may be rough, but they need to be accurate. They can be redrawn later for clarity and aesthetics. Several computer programs are available that help generate clear drawings. 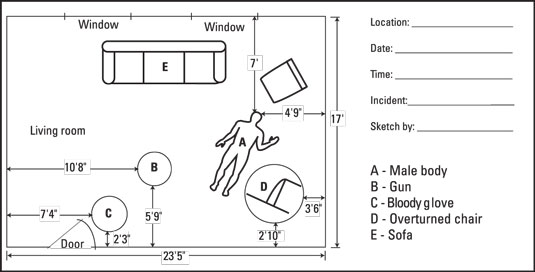 Credit: Illustration by Nan Owen.
Crime-scene sketches must be clear and show the coordinate positions of each item of evidence.

D.P. Lyle, MD, is the award-winning author of many nonfiction books and works of fiction. He was the co-host of Crime and Science Radio, and has worked as a forensics consultant with the writers of popular television shows such as Law & Order, CSI: Miami, Monk, Judging Amy, House, and Pretty Little Liars. Find him online at www.dplylemd.com.