What Is the Environmental Impact of Petroleum and Natural Gas?

What you know as oil is actually called petroleum or crude oil and may exist as a combination of liquid, gas, and sticky, tar-like substances. Oil and natural gas are cleaner fuels than coal, but they still have many environmental disadvantages.

The secret to fossil fuels’ ability to produce energy is that they contain a large amount of carbon. This carbon is left over from living matter — primarily plants — that lived millions of years ago. Oil and natural gas are usually the result of lots of biological matter that settles to the seafloor, where the hydrocarbons (molecules of hydrogen and carbon), including methane gas, become trapped in rocks.

Petroleum sources are usually small pockets of liquid or gas trapped within rock layers deep underground (often under the seafloor). Extracted crude oil is refined and used to manufacture gasoline (used in transportation) and petrochemicals (used in the production of plastics, pharmaceuticals, and cleaning products).

Like other resources, oil isn’t evenly distributed across the globe. The top oil-producing countries are Saudi Arabia, Russia, the U.S., Iran, China, Canada, and Mexico. Together, these countries produce more than half of the total oil resources in the world.

While some petroleum is found in gas form, the most common natural gas is methane. Methane usually occurs in small amounts with petroleum deposits and is often extracted at the same time as the petroleum. Natural gas can be found in certain rock layers, trapped in the tiny spaces in sedimentary rocks.

The environmental impact of drilling for oil

Oil companies pump liquid oil out of the ground by using drilling rigs and wells that access the pockets of oil resources. The oil fills the rock layers the way water fills a sponge — spreading throughout open spaces — instead of existing as a giant pool of liquid.

This arrangement means that to pump out all the oil, drillers have to extend or relocate the wells after the immediate area has been emptied. Oil drilling rigs set on platforms in the ocean to access oil reserves below the seafloor must therefore employ a series of more technically complex drill rigs built to access oil reserves in deeper water.

This figure illustrates some of the most commonly used ocean drilling rigs and platforms and the water depths they’re most suited for. 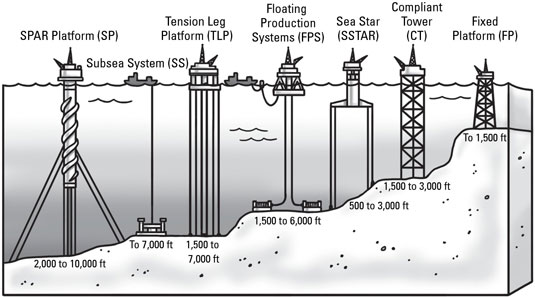 Oil is a cleaner fuel than coal, but it still has many disadvantages, such as the following:

The environmental impact of fracking for natural gas

Natural gas is a relatively clean-burning fuel source — it produces approximately half the CO2 emissions that coal burning produces — so demand for natural gas has increased in the last few decades as concerns grow about carbon emissions and global warming.

Now fuel producers are exploring natural gas in reservoirs separate from petroleum as sources of this fuel. To release the gas from the rocks and capture it for use as fuel, companies use a method of hydraulic fracturing, or fracking.

Fracking for natural gas requires injecting a liquid mix of chemicals, sand, and water into the gas-bearing rock at super high pressures — high enough to crack open the rock, releasing trapped gases. The gas is then pumped out of the rock along with the contaminated water.

The sand and chemicals are left behind in the rock fractures, leading to groundwater pollution and potentially less stable bedrock. Currently scientists are concerned that earthquakes in regions of the Midwestern United States that have never experienced earthquakes before are the result of wastewater from natural gas fracking operations.