Explore Book Buy On Amazon
Tornadoes are nature's most violent storms. Nothing the atmosphere dishes out is more destructive. They can sweep up anything that moves. They lift buildings from their foundations. They make a swirling cloud of violently flying debris. They are very dangerous to all living things, not only because of the sheer power of their winds, but the missiles of debris they create. 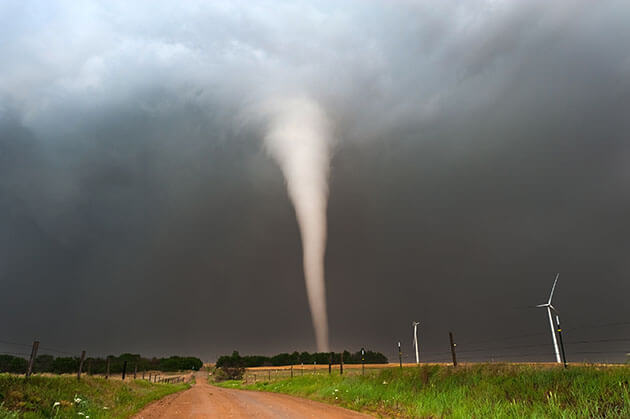 Wind measuring instruments are destroyed by tornadoes, although according to reliable estimates, their winds can exceed 250 miles per hour. Flying at those speeds, pieces of straw can penetrate wood. According to most scientists, the top wind speeds in the strongest tornadoes are about 280 miles per hour.

In an average year, 1,200 tornadoes are reported in the United States, far more than any other place in the world.

On average, tornadoes cause 80 deaths in the U.S. every year and 1,500 injuries, although averages don't mean very much when it comes to these storms. In 1998, for example, 130 people died in tornadoes in the U.S., including 42 who were killed in an outbreak in central Florida and 34 who died in a single tornado in Birmingham, Alabama.

Most human casualties are people in mobile homes and vehicles. The deadliest single tornado struck on March 18, 1925. In three and a half hours, it traveled 219 miles through Missouri, Illinois, and Indiana, killing 695 people.

Most tornadoes, nearly 90 percent, travel from the southwest to the northeast, although some follow quick-changing zigzag paths. Weak tornadoes, or decaying tornadoes, often have a thin ropelike appearance. The most violent tornadoes have a broad, dark, funnel-shape that extends from a dark wall cloud of a large thunderstorm.

There have been reports of some tornadoes that practically stand still, hovering over a single field.

The size of the place known as Tornado Alley expands through spring and summer as heating from the sun grows warmer and the flow of warm moisture from the Gulf of Mexico spreads farther north. An area that includes central Texas, Oklahoma, and Kansas is the hard core of the season, but before it is over, as Figure 1 illustrates, Tornado Alley extends north to Nebraska and Iowa. 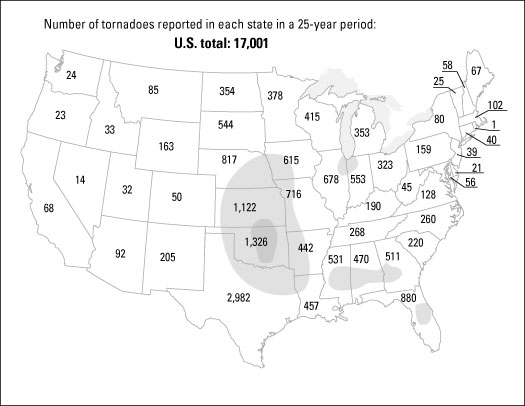 It shrinks and swells over time, but there is only one Tornado Alley. Nowhere else in the world sees weather conditions in a combination that is so perfect for these storms. Here's what makes the storms of Tornado Alley so bad:

Sometimes, the winds form a convective cap lid of warm air over the Plains that the rising air is eventually able to break through and explode upward into the sky. These are the ingredients for the most severe thunderstorms and most powerful twisters — sharp differences in temperatures at different levels, big contrasts in dryness and moisture, and layers of powerful winds that are blowing from different directions at different speeds.

Weather forecasters in Tornado Alley have a pretty good idea of the menu of conditions that are necessary to make severe thunderstorms, and they're pretty good at being able to forecast that severe thunderstorms are on the way. They can say that large hailstones and strong winds are likely, and a tornado is a possibility during the next several hours or the next day or two.

The presence in the area of supercell thunderstorms really puts pressure on forecasters in local weather service field offices. The national Storm Prediction Center in Norman, Oklahoma, is on the phone giving advice, but the buck stops in the local office. The local forecasters know that a lethal tornado could come spinning down out of the dark cloud at any moment, but they can't be sure until they see it show up on a Doppler radar screen or a funnel is actually observed.

Billions of dollars have been spent in the last several years on research and computer modeling, radars and satellite technologies, and high-speed communications. Progress has been made. On average, when tornado warnings were issued in 1994, communities had six minutes to react. By 1998, the average lead time for warnings had stretched to 12 minutes.

Television meteorologists and other media outlets play vital roles in such weather emergencies, continuously broadcasting the locations and predicted paths of tornadoes. Many lives are being saved by the increased public awareness and the lengthening time of advance warning that is available. In fact, the longer lead-time has reached the point where people are rethinking the idea of public shelters for tornadoes. As minutes are added to advance warnings, now it may be possible for people in harm's way to rush to a shelter before a tornado hits.

More than 15,000 severe storm and tornado watches and warnings are issued by the National Weather Service every year. Most of the time, they are accurate. Sometimes, they are missed. Occasionally there are false alarms. The successes are taken for granted and often overlooked in the details of a tornado disaster. The failures and the false alarms seem to be remembered forever. Perfectly reasonable people who will forgive you for missing the rain on their picnic now have a different attitude. When it comes to tornadoes, they want perfection.

What are the odds of a tornado crossing your path? Even in Tornado Alley, the odds are against such an unhappy occasion. When it happens, of course, it's a disaster — but still, the odds are high against it.

People think about tornadoes in tornado country the way people in the Southeast think about hurricanes and people in California think about earthquakes. It's part of the background of daily life that you really don't give very much thought to, because chances are, it's not going to happen.

The five-dollar word for this is complacency — a self-satisfied unawareness of danger — and somebody is always getting on their high horse about it. The truth is, day in and day out, most people have other things to worry about that just seem more real. And it's just human nature to be optimistic, and to think things are going to turn out for the best. But it leaves you open for some terrible surprises once in a while, which is kind of sad, when you think about it. Government people in the disaster business and American Red Cross relief workers who deal with victims of these storms see this sense of surprise on people's faces all the time.

A tornado watch or a warning?

Don't confuse a watch with a warning. There is a big difference. Here is what they are about:

The National Weather Service and the American Red Cross have put together these basic tips about tornado safety:

John D. Cox is a professional science writer. He studied biological and physical sciences at Harvard and MIT, and served as a fellow of the Knight Science Journalism Fellowship Program at MIT.