The Basics of Nuclear Fission

Explore Book Buy On Amazon
Nuclear fission occurs when a larger isotope breaks apart into two or more elements. Scientists usually accomplish this task (for some controlled nuclear reactions) by bombarding a large isotope with a second, smaller one — commonly a neutron. The collision results in nuclear fission.

The nuclear fission of uranium-235 is shown in the following equation:

Matter disappears during the nuclear reaction. This loss of matter is called the mass defect. The missing matter is converted into energy. You can actually calculate the amount of energy produced during a nuclear reaction with a fairly simple equation developed by Einstein:

In the equation for the fission of U-235, notice that one neutron was used, but three were produced. These three neutrons, if they encounter other U-235 atoms, can initiate other fissions, producing even more neutrons. In terms of nuclear chemistry, it’s a continuing cascade of nuclear fissions called a chain reaction. The chain reaction of U-235 is shown in the following figure.

This chain reaction depends on the release of more neutrons than were used during the nuclear reaction. If you were to write the equation for the nuclear fission of U-238, the more abundant isotope of uranium, you’d use one neutron and only get one back out. You can’t have a chain reaction with U-238.

But isotopes that produce an excess of neutrons in their fission support a chain reaction. This type of isotope is said to be fissionable, and there are only two main fissionable isotopes used during nuclear reactions — uranium-235 and plutonium-239.

The minimum amount of fissionable material needed to ensure that a chain reaction occurs is called the critical mass. Anything less than this amount is called subcritical. 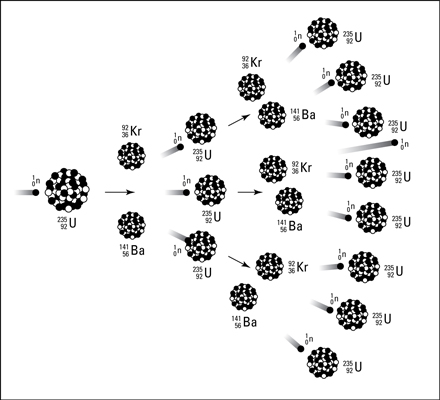 The chain reaction of uranium-235

Because of the tremendous amount of energy released in a fission chain reaction, the military implications of nuclear reactions were immediately realized. The first atomic bomb was dropped on Hiroshima, Japan, on August 6, 1945.

In an atomic bomb, two pieces of a fissionable isotope are kept apart. Each piece, by itself, is subcritical. When it’s time for the bomb to explode, conventional explosives force the two pieces together to cause a critical mass. The chain reaction is uncontrolled, releasing a tremendous amount of energy almost instantaneously.

The secret to controlling a chain reaction is to control the neutrons. If the neutrons can be controlled, then the energy can be released in a controlled way. That’s what scientists have done with nuclear power plants.

In many respects, a nuclear power plant is similar to a conventional fossil fuel power plant. In this type of plant, a fossil fuel (coal, oil, natural gas) is burned, and the heat is used to boil water, which, in turn, is used to make steam. The steam is then used to turn a turbine that is attached to a generator that produces electricity.

Besides the U-235 isotope of uranium, the other commonly used fissionable isotope, plutonium-239 (Pu-239), is very rare in nature. But there’s a way to make Pu-239 from U-238 in a special fission reactor called a breeder reactor.

Uranium-238 is first bombarded with a neutron to produce U-239, which decays to Pu-239. The process is shown in the following figure. 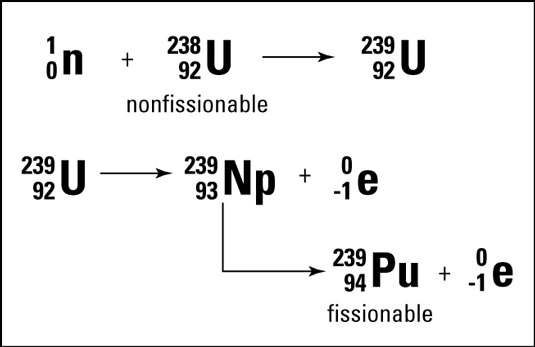 Breeder reactors can extend the supply of fissionable fuels for many, many years, and they’re currently being used in France. But the United States is moving slowly with the construction of breeder reactors because of several problems associated with them: