How to Perform Mole-Mole Conversions from Balanced Equations

Explore Book Buy On Amazon
You can balance a chemical equation by adjusting the coefficients that precede reactant and product compounds within the equation. After you've got a balanced equation, you can use the coefficients to build mole-mole conversion factors. These kinds of mole conversion factors tell you how much of any given product you get by reacting any given amount of reactant.

Consider the following balanced equation for generating ammonia from nitrogen and hydrogen gases:

Industrial chemists around the globe perform this reaction, humorlessly fixating on how much ammonia product they'll end up with at the end of the day. In any event, how are chemists to judge how closely their reactions have approached completion? The heart of the answer lies in a balanced equation and the mole-mole conversion factors that spring from it. 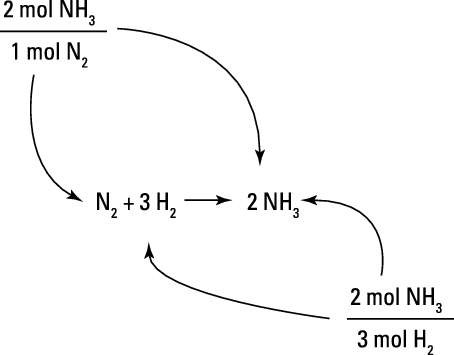 Building mole-mole conversion factors from a balanced equation.
For example, say you want to calculate how many moles of ammonia can be expected from the reaction of 278 mol of N2 gas.

To solve this problem, you begin with your known quantity, the 278 mol of nitrogen that's to be reacted. You multiply that quantity by the mole-mole conversion factor that relates moles of nitrogen to moles of ammonia. You write the conversion factor so that mol NH3 is on top and mol N2 is on the bottom. That way, the mol N2 units cancel, leaving you with the desired units, mol NH3. The numbers you put in front of the units for the conversion factor come directly from the coefficients in the balanced chemical equation.

So, you expect 556 mol of ammonia from the reaction.

Try another example. One source of hydrogen gas is the electrolysis of water, in which electricity is passed through water to break hydrogen-oxygen bonds, yielding hydrogen and oxygen gases:

Based on this equation, solve these three problems: