How to Identify Molecular Fragments from NMR and IR Spectra

By: Arthur Winter and
Updated: 07-23-2021
From The Book: Organic Chemistry I For Dummies

After you’ve determined the number of hydrogen atoms that each NMR peak represents, you can assign each peak to a fragment of the molecule. This table shows some common fragments. 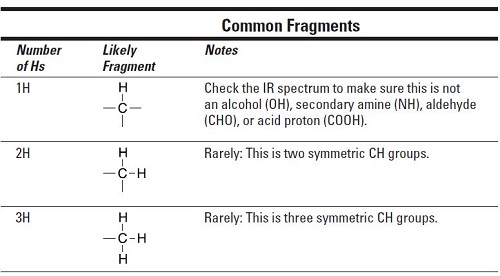 After you determine all of the fragments (including fragments you determined from the IR, if you’re given one), add up all of the atoms in your fragments to make sure that they match the molecular formula and to be certain that you’re not missing any atoms.

Here’s an example: Given the IR and NMR spectra for compound C5H10O, identify the fragments. From the NMR (shown in the figure), you determine that the whole number relative ratio for the molecule is 2:3:2:3. From the table, the most likely fragments for 2H, 3H, 2H, and 3H are CH2, CH3, CH2, and CH3, respectively.

Adding up all of the atoms from these fragments to see if the number of atoms matches the molecular formula shows that one carbon and one oxygen atom are missing. Based on its molecular formula, you know that the C5H10O molecule has one degree of unsaturation; this unsaturation could be accounted for by the double bond in the carbonyl seen in the IR spectrum (the intense peak at 1,710 cm–1 in the figure). 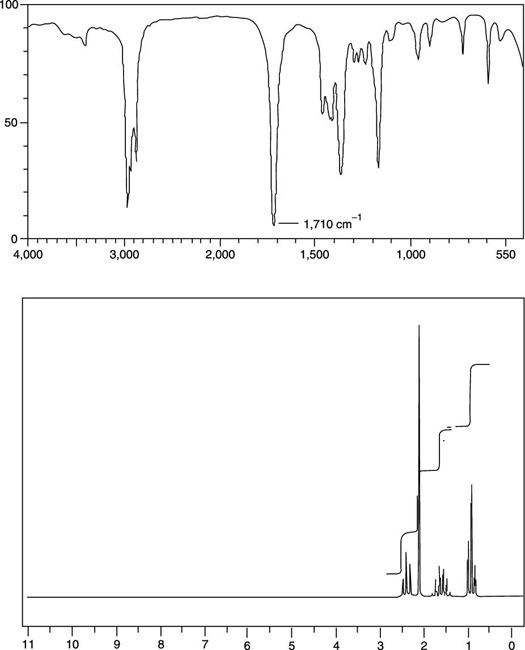 and the IR spectrum doesn’t show an aldehyde C-H stretch at 2,700 cm–1, the carbonyl group is a ketone.

By identifying these fragments (shown in the next figure), you can narrow down the number of ways in which they can be pieced together to form the final structure. 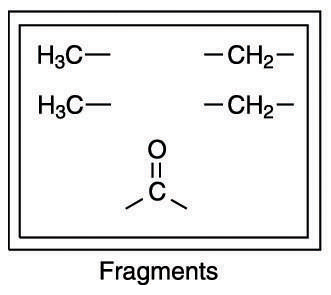