How to Identify and Order the Substituents in a Branched Alkane

By: Arthur Winter and
Updated: 07-16-2021
From The Book: Organic Chemistry I For Dummies

Locate and identify the substituents in a branched alkane 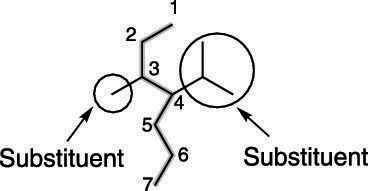 Some complex substituents have common names rather than systematic ones. These simply must be memorized. The most important common substituents are the isopropyl group (a three-carbon group that looks like a snake’s tongue), the tert-butyl (or t-butyl) group and the sec-butyl group, all shown here.

Order the substituents in a branched alkane

Of course, there’s always a stick to throw into the spokes. One quirk involving the common names of tert-butyl and sec-butyl substituents comes when placing them in alphabetical order, as the tert and sec portions of the name are ignored. In other words, tert-butyl would be ordered as if it started with the letter b, the same as with sec-butyl. Isopropyl, however, is alphabetized normally, under the letter i.