How to Find Functional Groups in the IR Spectrum

IR (infrared) spectroscopy is useful in organic chemistry because it enables you to identify different functional groups. This is because each functional group contains certain bonds, and these bonds always show up in the same places in the IR spectrum.

Functional groups are the portions in an organic molecule that dictate how the molecule will react.

To generate the IR spectrum, different frequencies of infrared light are passed through a sample, and the transmittance of light at each frequency is measured. The transmittance is then plotted versus the frequency of the light (which is presented in the somewhat unusual units of cm–1). 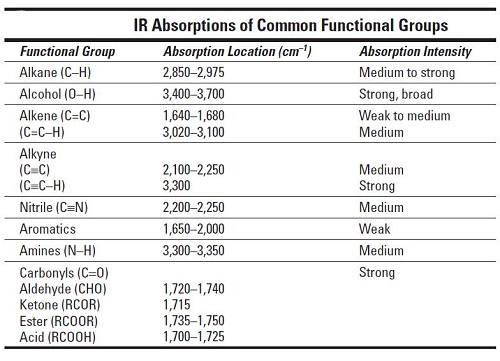 The IR spectrum of hexane (C6H14) is shown in the next figure. Because hexane has only C-H and C-C bonds (and no functional groups), this spectrum can help orient you to the important regions in an IR spectrum. 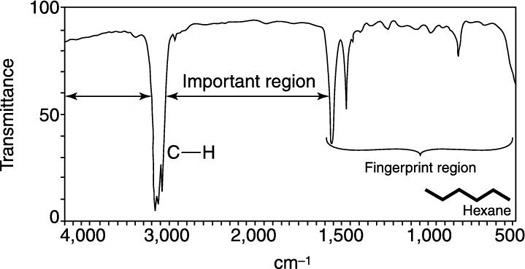 The IR spectrum of hexane.

Note the two features of the spectrum — the C-H absorptions between 2,800 cm–1 to 3,000 cm–1, and the fingerprint region below 1,500 cm–1. You should think of this spectrum as a blank; you mentally subtract out the two regions shown on this spectrum to look for the important absorptions in unknown compounds. Using these C-H stretches as a frame of reference is also convenient, because almost every organic compound contains C-H bonds. (Note that while individual C-H stretches are weak because of small changes in the dipole moment, a typical molecule often has a lot of these bonds, which makes these absorptions appear fairly intense.) Any absorptions to the left of these C-H stretches are typically N-H, O-H, or alkynyl (triple bond) C-H stretches. The other common functional groups have bands between the fingerprint region and the C-H stretching absorptions.