How the Electroplating Process Works

Electrolytic cells, cells that use electricity to produce a desired redox reaction, are used extensively in our society, for processes such as electroplating and electrolysis.

Rechargeable batteries are another primary example of this type of cell, but there are many other applications. Ever wonder how the aluminum in that aluminum can is mined? Aluminum ore is primarily aluminum oxide, represented as:

Aluminum metal is produced by reducing the aluminum oxide in a high temperature electrolytic cell using approximately 250,000 amps. That’s a lot of electricity. It’s far cheaper to take old aluminum cans, melt them down, and reform them into new cans than it is to extract the metal from the ore. That’s why the aluminum industry is strongly behind the recycling of aluminum.

The overall cell reaction is:

In a similar fashion, sodium metal and chlorine gas can be produced by the electrolysis of molten sodium chloride.

Electrolytic cells are also used in a process called electroplating. In electroplating, a more-expensive metal is plated (deposited in a thin layer) onto the surface of a cheaper metal by electrolysis. Before plastic auto bumpers became popular, chromium metal was electroplated onto steel bumpers.

The following diagram shows the electroplating of silver onto a teapot. A battery is commonly used to furnish the electricity for the process. The teapot acts as the cathode and a bar of silver acts as the anode. The silver bar furnishes the silver ions that are reduced onto the surface of the teapot. Many metals and even some alloys can be plated out in this fashion. 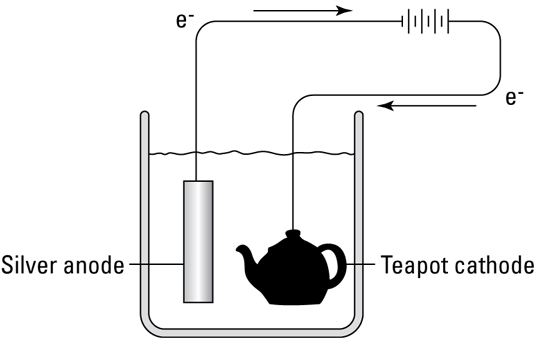 Electroplating silver onto a teapot.