How Is Energy Measured?

You probably use the Fahrenheit scale to measure temperatures, but most scientists and chemists use either the Celsius (°C) or Kelvin (K) temperature scale. (There’s no degree symbol associated with K.) The following figure compares the three temperature scales using the freezing point and boiling point of water as reference points. 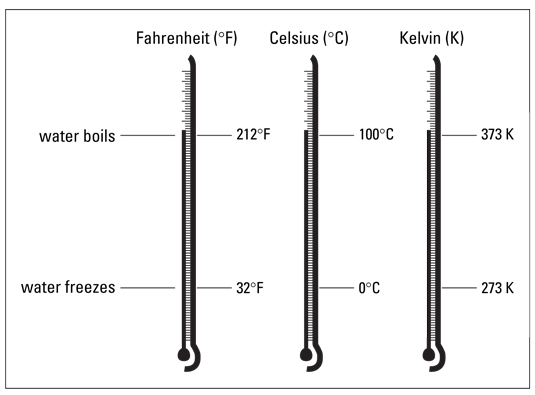 You may want to know how to convert from Fahrenheit to Celsius (because most of us still think in °F). Here are the equations you need:

Be sure to subtract 32 from your Fahrenheit temperature before multiplying by 5/9:

Be sure to multiply your Celsius temperature by 9/5 and then add 32.

Try using these equations to confirm that the normal body temperature of 98.6°F equals 37°C.

Heat is not the same as temperature. When you measure the temperature of something, you’re measuring the average kinetic energy of the individual particles. Heat, on the other hand, is a measure of the total amount of energy a substance possesses.

The unit of heat in the SI system is the joule (J). Most of us still use the metric unit of heat, the calorie (cal). Here’s the relationship between the two:

The calorie is a fairly small amount of heat — the amount it takes to raise the temperature of 1 gram of water 1°C. The kilocalorie (kcal), which is 1,000 calories, is a convenient unit of heat. If you burn a large kitchen match completely, it produces about 1 kilocalorie (1,000 cal) of heat.

When you hear the word calories, you may think about food and counting calories. Food contains energy (heat). The measure of that energy is the nutritional Calorie (which is commonly capitalized), which is really a kilocalorie (kcal). That candy bar you just ate contained 300 nutritional Calories, which is 300 kcal or 300,000 calories.