Explore Book Buy On Amazon
In this article, we look at how electron-donating and electron withdrawing substituents direct the substitution on a benzene ring.

In the synthesis of disubstituted benzenes, the cation resulting from ortho-para addition with electron donors will be more stable than the meta-derived cation. For example, if you brominate anisole, as shown in the first figure, you get substitution of the bromine at the ortho and para positions, but not at the meta position. This is because methoxy groups (OCH3) are pi electron donors, so they direct all incoming electrophile traffic into the ortho and para positions. 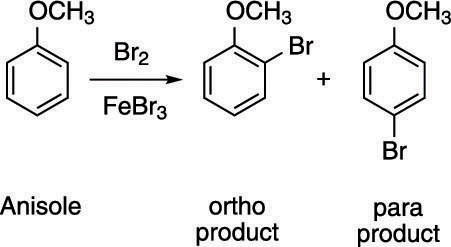 Bromine addition to anisole
You can see why the methoxy group directs to the ortho and para positions by looking at the intermediate carbocation for both the para substitution and the meta addition, shown in the next figure. 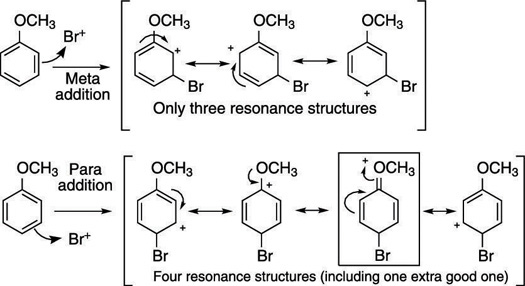 The carbocation resulting from meta substitution, on the other hand, has only three resonance structures, none of which have all atoms with filled valence octets. Recall the general rule that stability increases as the number of resonance structures increases. Thus, with electron donors on the aromatic ring, ortho-para products are selectively formed.

When you synthesize disubstituted benzenes, and the first added group is an electron-withdrawing substituent, this group usually directs incoming electrophiles to the meta position (shown in the first figure). 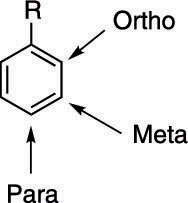 The ortho, meta, and para positions
For example, take the bromination reaction of nitrobenzene, shown in the next figure. Nitro groups are electron-withdrawing groups, so bromine adds to the meta position. 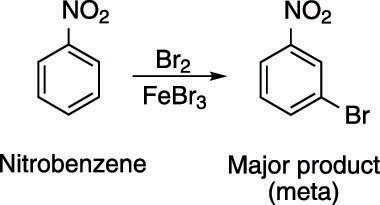 The bromine substitution of nitrobenzene
To see why a meta product is formed instead of ortho-para products, compare the intermediate cation formed as a result of para bromine addition to the cation generated from meta addition (shown here). 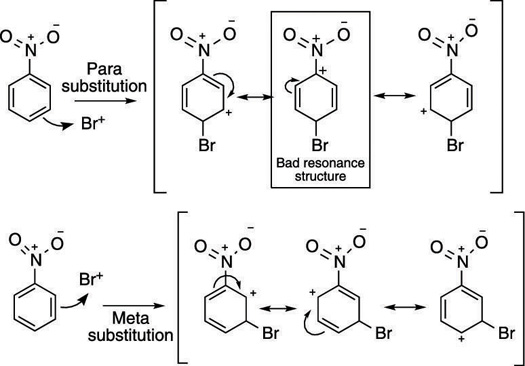 To clarify what is meant by electron-donating and electron-withdrawing substituents: Any substituent whose first atom (the one that's attached to the benzene ring) has a lone pair will be a pi electron donor to the phenyl ring, as shown in the resonance structure in the next figure.

Pi electron donors to the phenyl ring
Note that the resonance structures show that substituents that are pi donors add electron density to the ortho and para positions of the ring. So, pi donors activate the benzene ring toward electrophilic attack (attack by incoming electrophiles) at the ortho and para positions. Adding electron density to the benzene ring makes the ring more nucleophilic (that is, more nucleus loving) and activates the ring. Therefore, pi donors are considered ring activators.

The only exceptions are the halogens, which are not terribly good pi donors. They deactivate the ring as a result of being highly electronegative groups, pulling electrons away from the benzene ring toward themselves, making the ring less nucleophilic. But even though halogens are ring deactivators, they're still ortho-para directors.

Pi-withdrawing groups (such as NO2 groups, carbonyl groups, CN, and so on) pull electrons away from the ring and deactivate it, making the ring less nucleophilic. Pi electron-withdrawers are thus ring deactivators. A deactivator means that the reaction of benzenes substituted with these substituents will be slower than the reaction of unsubstituted benzene. Pi electron-withdrawing substituents are meta directors. The table outlines the nature of different substituents.