How a Nuclear Power Plant Functions

In many respects, a nuclear power plant is similar to a conventional fossil fuel power plant. In a conventional plant, a fossil fuel (such as coal, oil, or natural gas) is burned, and the heat is used to boil water, which in turn is used to make steam. The steam is then used to turn a turbine that’s attached to a generator that produces electricity.

Most people believe that the concepts behind nuclear power plants are tremendously complex. That’s really not the case.

A fissionable isotope, such as uranium-235, is contained in fuel rods in the reactor core. All the fuel rods together comprise the critical mass. Control rods, commonly made of boron or cadmium, are in the core, and they act like neutron sponges to control the rate of radioactive decay. Operators can stop a chain reaction completely by pushing the control rods all the way into the reactor core, where they absorb all the neutrons. The operators can then pull out the control rods a little at a time to produce the desired amount of heat.

A liquid (water or sometimes liquid sodium) is circulated through the reactor core, where it absorbs the heat generated by the fission reaction. The liquid then flows into a steam generator, where steam is produced as the heat is absorbed by water. This steam is then piped through a steam turbine that’s connected to an electric generator. The steam is condensed and recycled through the steam generator. This process forms a closed system — that is, no water or steam escapes; it’s all recycled.

The liquid that circulates through the reactor core is also part of a closed system. This closed system helps ensure that no contamination of the air or water takes place.

The United States has approximately 100 nuclear reactors, which produce a little more than 20 percent of the country’s electricity. In France, almost 80 percent of the country’s electricity is generated through nuclear fission. Nuclear power plants have certain advantages. No fossil fuels are burned (saving fossil-fuel resources for producing plastics and medicines), which means there are no combustion products, such as carbon dioxide, sulfur dioxide, and so on, to pollute the air and water. But significant problems are associated with nuclear power plants.

Nuclear power plants are expensive to build and operate. The electricity that’s generated by nuclear power costs about twice as much as electricity generated through fossil fuel or hydroelectric plants. Another problem is that the supply of fissionable uranium-235 is limited. Of all the naturally occurring uranium, only about 0.75 percent is U-235. A vast majority is nonfissionable U-238. At current usage levels, the world will run out of naturally occurring U-235 in less than 100 years. A little bit more time can be gained through the use of breeder reactors, but the amount of nuclear fuel available in the earth is limited, just as the amount of fossil fuels is.

Although nuclear power reactors really do have a good safety record, the distrust and fear associated with radiation make most people sensitive to safety issues and accidents. The most serious accident to occur in the United States happened in 1979 at the Three Mile Island plant in Pennsylvania. A combination of operator error and equipment failure caused a loss of reactor core coolant. The loss of coolant led to a partial meltdown and the release of a small amount of radioactive gas. There was no loss of life or injury to plant personnel or the general population.

The outcome was much worse at Chernobyl, Ukraine, in 1986. Human error, along with poor reactor design and engineering, contributed to a tremendous overheating of the reactor core, causing it to rupture. Two explosions and a fire resulted, blowing apart the core and scattering nuclear material into the atmosphere. A small amount of this material made its way to Asia and much of Europe. Hundreds of people died. Many others felt the effects of radiation poisoning. Instances of thyroid cancer, possibly caused by the release of I-131, have risen dramatically in the towns surrounding Chernobyl, and the full effects of this disaster won’t be fully known for many years.

Disposal issues: Getting rid of the stuff

How can nuclear waste products be safely stored until the isotopes’ residual radioactivity has dropped to safe limits (ten half-lives)? How can we protect the environment and ourselves and our children from this waste for generations to come? These questions are undoubtedly the most serious problem associated with the peaceful use of nuclear power.

Nuclear waste is divided into low-level and high-level material, based on the amount of radioactivity being emitted. In the United States, low-level wastes are stored at the site of generation or at special storage facilities. The wastes are basically buried and guarded at the sites. High-level wastes pose a much larger problem. They’re temporarily being stored at the site of generation, with plans to eventually seal the material in glass and then in drums. The material will then be stored underground in Nevada. At any rate, the waste must be kept safe and undisturbed for at least 10,000 years. Other countries face the same problems. Some nuclear material has been dumped into deep trenches in the sea, but this practice has been discouraged by many nations.

Only the U-235 isotope of uranium is fissionable, because it’s the only isotope of uranium that produces the excess of neutrons needed to maintain a chain reaction. The far more plentiful U-238 isotope doesn’t produce those extra neutrons.

The other commonly used fissionable isotope, plutonium-239 (Pu-239), is very rare in nature. But scientists can make Pu-239 from U-238 in a special fission reactor called a breeder reactor. Uranium-238 is first bombarded with a neutron to produce U-239, which decays to Pu-239. The process is shown here. 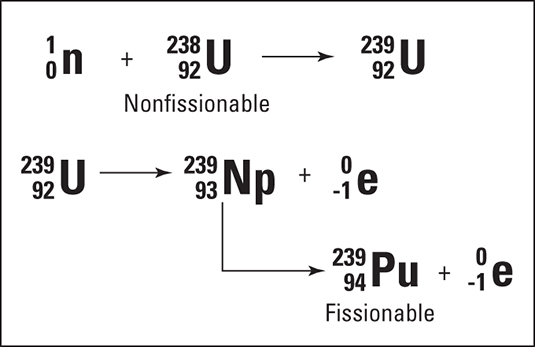 Breeder reactors can extend the supply of fissionable fuels for many, many years, and they’re currently being used in France. But the United States is moving slowly with the construction of breeder reactors because of several problems associated with them. First, they’re extremely expensive to build. Second, they produce large amounts of nuclear waste. And finally, the plutonium that’s produced is much more hazardous to handle than uranium and can easily be used in an atomic bomb.