How a Mass Spectrometer Identifies Isotopes

Mass spectrometry provides valuable information about the structure of a molecular compound, including its isotopes. Because mass spectrometry determines the weights of fragments, atoms that naturally have heavy isotopes become important.

Isotopes are atoms that have the same number of protons and electrons, but different numbers of neutrons.

Isotope effects are most readily observed in compounds containing the halogens chlorine (Cl) and bromine (Br). In nature, chlorine consists of about 75 percent of the 35Cl isotope and about 25 percent of the heavier 37Cl isotope, in which the chlorine has two additional neutrons. This means that if 100 chlorine-containing molecules were chosen at random, on average 75 of them would contain the 35Cl isotope, while 25 of them would weigh two mass units more because they contain the heavier 37Cl isotope. Because mass spectrometry weighs molecules, these heavier-mass isotopes will be observed in the mass spectrum.

In fact, both of these isotopes will be seen in the mass spectrum. But because a sample of a chlorine-containing molecule has three times as many of the 35Cl isotope as it has of the heavier 37Cl isotope, the molecular ion peak (which corresponds to molecules containing the 35Cl isotope) will be three times as intense as the peak two mass units heavier that corresponds to molecules containing the heavier isotope. Because this heavy isotope peak is two mass units heavier than the peak of the molecular ion containing the 35Cl isotope, it's called the M+2 ion. (If the heavy isotope is heavier by one neutron, it's called the M+1 isotope peak; by two neutrons, the M+2 peak; by 3 neutrons, the M+3, and so on.)

These isotope effects allow you to spot molecules that contain chlorine, because the spectrum of a chlorine-containing molecule will contain a peak that's two mass units heavier than the molecular ion (M+) and that's one-third as intense as the M+ peak (see the next figure). 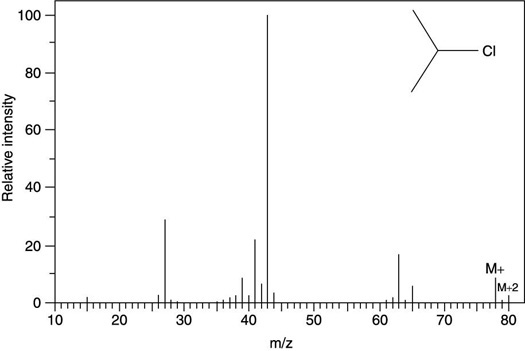 Naturally occurring bromine consists of a mixture of isotopes that's approximately 50 percent 79Br and 50 percent 81Br. Therefore, bromine is easily spotted in the mass spectrum by observing a peak of approximately equal intensity two mass units higher than the molecular ion peak (as you can see in the next figure). 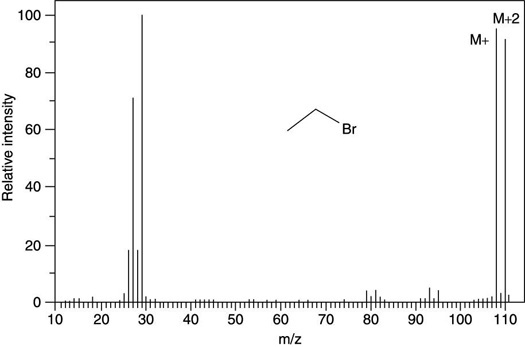 Other atoms have isotopes that are less abundant. Naturally occurring carbon contains about 1 percent of the 13C isotope. Because a molecule that consists of many carbons will have a greater chance of having a 13C atom, molecules with many carbon atoms will have a larger 13C isotope peak in the mass spectrum than molecules that contain fewer carbon atoms. (Because 13C is one mass unit heavier than 12C, the isotope peak is called the M+1 peak.) This, in fact, is a crude way to determine the number of carbons in the molecule, because the size of the M+1 isotope peak relative to the molecular ion (M+) peak depends on the number of carbons in the molecule.