A model is useful because it helps you understand what’s observed in nature. It’s not unusual to have more than one model represent and help people understand a particular topic.

The quantum mechanical model is based on quantum theory, which says matter also has properties associated with waves. According to quantum theory, it’s impossible to know the exact position and momentum of an electron at the same time. This is known as the Uncertainty Principle.

The quantum mechanical model of the atom uses complex shapes of orbitals (sometimes called electron clouds), volumes of space in which there is likely to be an electron. So, this model is based on probability rather than certainty.

Four numbers, called quantum numbers, were introduced to describe the characteristics of electrons and their orbitals:

The principal quantum number n describes the average distance of the orbital from the nucleus — and the energy of the electron in an atom. It can have positive integer (whole number) values: 1, 2, 3, 4, and so on. The larger the value of n, the higher the energy and the larger the orbital. Chemists sometimes call the orbitals electron shells.

The following figure shows the shapes of the s, p, and d orbitals. 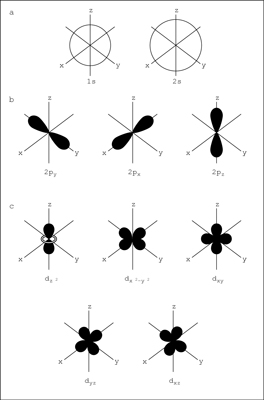 As shown in the top row of the figure (a), there are two s orbitals — one for energy level 1 (1s) and the other for energy level 2 (2s). The s orbitals are spherical with the nucleus at the center. Notice that the 2s orbital is larger in diameter than the 1s orbital. In large atoms, the 1s orbital is nestled inside the 2s, just like the 2p is nestled inside the 3p.

The magnetic quantum number is designated as:

This number describes how the various orbitals are oriented in space. The value of this number depends on the value of l. The values allowed are integers from –l to 0 to +l. For example, if the value of l = 1 (p orbital), you can write three values for this number: –1, 0, and +1. This means that there are three different p subshells for a particular orbital. The subshells have the same energy but different orientations in space.

The second row (b) of the figure shows how the p orbitals are oriented in space. Notice that the three p orbitals correspond to magnetic quantum number values of –1, 0, and +1, oriented along the x, y, and z axes.

This number describes the direction the electron is spinning in a magnetic field — either clockwise or counterclockwise. Only two values are allowed: +1/2 or –1/2. For each subshell, there can be only two electrons, one with a spin of +1/2 and another with a spin of –1/2.