There are four types of gas exchange systems:

The integument is the skin or surface of an animal. Very small animals and a few larger animals that live in moist environments use this type of gas exchange. Worms are an example.

Earthworms have capillaries right under their “skin.” As the worms move through the soil, they loosen the soil, which creates air pockets. The worms take in oxygen from the air pockets and release carbon dioxide right through their outer surface. However, to be able to exchange gases directly with their environment, earthworms must stay moist.

Animals that live in water have gills, which are extensions of their outer membranes. The membranes in gills are very thin (usually just one cell thick), which allows gas exchange between the water that flows over them. Capillaries connect to the cells in the gills so that gases can be taken in from the water and passed into the bloodstream of the aquatic animal. Also, gaseous waste can diffuse from the capillary into the cells of the gill and pass out into the watery environment. 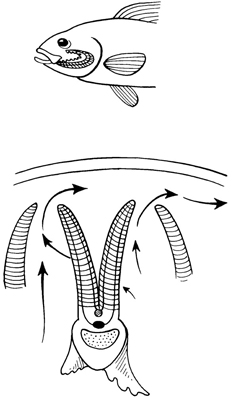 The structure and function of gills.

In fish, the gills are membranous filaments covered by a flap called an operculum. The fish opens and closes the flaps protecting the gills by opening and closing its mouth. After water enters the mouth, the water is forced through the gills and then out the back of the operculum.

The lungs of land animals

Lungs may be different shapes and sizes in various land animals, but they function essentially the same as they do in humans. Humans have a pair of lungs that lie in the chest cavity; one lung is on the left side of the trachea, and the other is on the right. The trachea is the tube that connects the mouth and nose to the lungs. 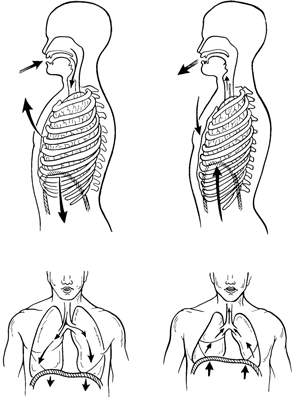 The breathing process in humans: inhalation and exhalation.

When you inhale (breathe in), air enters through the nostrils (the openings to the nose), and flows through the nasal cavity. Inside the nasal cavity, hair, cilia, and mucus trap dust and dirt particles, purifying the air that enters the lungs. Occasionally, you must cough and either spit or swallow to move the trapped particles out of your throat.

Every cell in your body needs oxygen for its metabolic processes, so oxygen is vital to proper functioning. Without it, you die. So, breathe deeply and make sure that those blood cells carry it to every nook and cranny of your body.

The other motion that happens when you breathe in is that the diaphragm muscle contracts, which allows your ribcage to move upward and outward. Because the lungs have more room when your chest is expanded, they open up and air rushes in to fill the space.

When your lungs fill, the air passes through all the branches of the bronchi into the tiniest air sacs, which are called alveoli. The alveoli are the structures where oxygen and carbon dioxide exchange.

When you exhale, the diaphragm muscle relaxes and moves back up. This action causes the ribcage to move downward and inward, minimizing the size of the lungs. This bellows-type movement increases the pressure inside the now-smaller lungs, which forces (or pulls) air up out of the lungs. In the exhaled air is carbon dioxide that was deposited by the red blood cells.