Cells build up stores of molecules required for growth inside the cell in higher amounts than are found outside the cell. Water naturally wants to flow into the cell to balance the number of molecules inside and outside, but if the cell were to allow this, it would burst like an overfilled balloon. The cell wall allows the cell to withstand this osmotic pressure.

In bacteria, the cell wall is made of peptidoglycan, a structure not found in either eukaryotes or archaea. This structure forms a meshlike sac around the cell and provides it with rigidity. Peptidoglycan is made up of polysaccharides linked by peptide bridges. Polysaccharides are long sugar chains of alternating N-acetylglucosamine (NAG) and N-acetylmuramic acid (NAM) units, which are firmly attached together by chemical bonds.

As shown, polysaccharides arrange like cables that encircle the cell and are connected by peptide bridges made of the four amino acids L-alanine, D-alanine, D-glutamic acid, and either lysine or diaminopimelic acid (DAP). Peptide bridges are covalently linked to NAM sugars. Each individual unit of peptidoglycan is, therefore, a NAG-NAM-tetrapeptide. 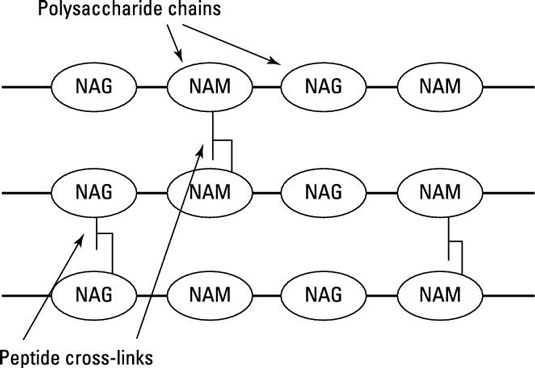 The peptide bridge can be made up of different amino acids and creates diversity in the peptidoglycan structure between bacteria.

Differences at the surface

You can see the image of the two types of cells as imaged by a transmission electron microscope (A) and a schematic representation of the differences in cell wall structure (B). 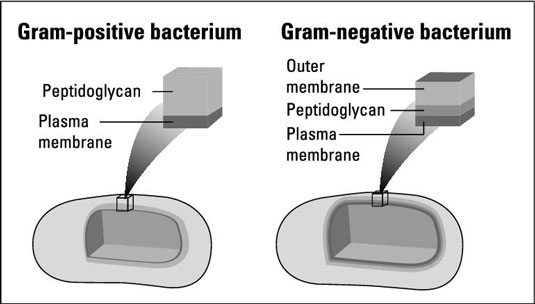 Some bacteria, like Mycoplasma, lack cell walls and are only enclosed in a membrane. Mycoplasma species normally live inside other cells where they don’t face as much osmotic pressure. Their membranes are often tougher than other bacterial membranes because they contain cholesterol. Most bacterial groups that we know of, however, have a cell wall.

Gram-negative cells have an additional membrane on the outer surface of the peptidoglycan called the outer membrane, but it’s not your typical membrane. The inner leaflet contains proteins that anchor it to the cell wall. These tethers are called lipoproteins. The outer leaflet is made up of a different kind of phospholipid, lipopolysaccharide (LPS). LPS is a large molecule with three main building blocks:

Archaea, like other single-cell organisms, have tough cell walls that protect them from the environment, but they differ in that they lack peptidoglycan. The cell wall of archaea is most commonly made of surface-layer proteins, called the S-layer. The S-layer assembles from proteins or glycoproteins that form the outermost layer of the cell.

Some archaeal cell walls, like those of certain methanogens (methane producers), contain pseudomeurin (pseudo = false, meurin = wall). The chemical composition of pseudomeurin and peptidoglycan differ in the sugars and the amino acids they contain. Other archaeal cell walls have a layer of polysaccharides and provide protection either alone or with an S-layer as well.