The Parts of the Female Reproductive System

The female reproductive system produces eggs and supports the developing fetus. The reproductive process begins when a sperm cell from a male joins with an egg cell from a female in a process that scientists call fertilization.

The figure illustrates the structures of the female reproductive system.

In females, the height of sexual stimulation also causes intense muscular contractions and a pleasurable feeling of release called orgasm. The fluid released inside the vagina helps create a watery environment that the sperm can swim in. The uterus’s muscular contractions slightly open the cervix, which allows sperm to get inside the uterus and also helps pull sperm upward toward the fallopian tubes.

For questions 1-8, use the terms that follow to label the parts of the female reproductive system in the figure. 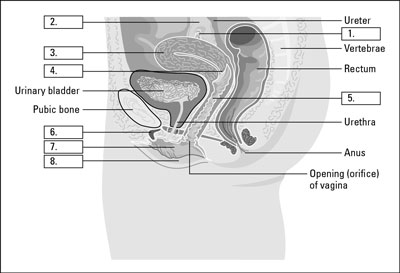