How to Figure Out the Structures of Animal Cells

Holding it all together: The plasma membrane

The fluid inside a cell (intracellular fluid) is called plasma or cytoplasm (cyto- means cell). The membrane holding the fluid in the cell is called a plasma membrane, also called the cell membrane.

The cells themselves are floating in a type of fluid, called a matrix. The matrix is insoluble — substances do not dissolve in its fluid. The matrix just supports the cells. The fluid that squeezes in between each and every cell is called extracellular fluid because it is outside of the cell.

The job of the plasma membrane is to separate the chemical reactions occurring inside the cell from the chemicals that are floating in the extracellular fluid. If the plasma membrane didn’t separate the inside and the outside of the cell, waste products excreted from the inside of the cell to the outside could flow back inside. 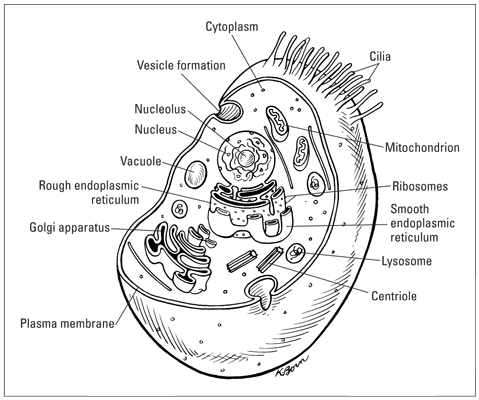 Structures in a typical animal cell.

Controlling the show: The nucleus

In the nucleus of cells that are not currently dividing, clumps of thread-like genetic material called chromatin appear. Right before a cell divides, the chromatin bunches up into chromosomes, which contain DNA (deoxyribonucleic acid).

The DNA has two strands, each of which has sequences of nitrogenous bases that form the genetic code. The genetic code, which is derived from the nucleotide bases in the genes on strands of DNA, is “interpreted,” and then a ribonucleic acid (RNA) molecule called messenger RNA (mRNA) is produced from the DNA template. The mRNA uses the information from the genetic code for certain amino acids — the building blocks of protein — in the cell. The amino acids are then taken by transfer RNA (tRNA) to an organelle called a ribosome, where the final proteins are made.

Each nucleus has a round mass inside it called a nucleolus. The nucleolus produces the third type of RNA molecule — ribosomal RNA (rRNA). This type of RNA helps to make ribosomes, which get transferred from the nucleus to the cytoplasm to help in making proteins.

Surrounding each nucleus is a double layer formed from proteins and lipids that separates the nucleus from the cytoplasm. This two-layered structure is called the nuclear envelope or nuclear membrane.

The factory of the cell: The endoplasmic reticulum

Ribosomes on the rough ER serve as the place for the synthesis of proteins that are directed by the genes to be put together in the ER. (Other proteins are put together on ribosomes attached to other organelles or floating free in the cytoplasm.) The smooth ER contains transport vesicles that shuttle cellular products from cytoplasm to organelle, from organelle to organelle, or from organelle to plasma membrane. In addition to protein synthesis, the ER is involved in the metabolism of lipids (fats).

The main function of ER is to make and transport proteins. The ER is essentially the “womb” for new protein chains. Protein synthesis, or production, begins in the nucleus, with the mRNA molecule carrying the genetic information as to what amino acids (proteins) should be produced.

Preparing for distribution: The Golgi apparatus

In biology, as well as other sciences, structures usually are named for the person who found them. In this case, the Italian scientist Camillo Golgi finds fame. The Golgi apparatus is very close to the ER; in the figure above, it looks like a maze with water droplets splashing off of it. The “water droplets” are transport vesicles bringing material from the ER to the Golgi apparatus.

Inside the Golgi apparatus, products produced by the cell, such as hormones or enzymes, are packaged for export to other organelles or to the outside of the cell. The Golgi apparatus surrounds the product to be secreted with a sac called a vesicle. The vesicle finds its way to the plasma membrane, where certain proteins allow a channel to be produced so that the products inside the vesicle can be secreted to the outside of the cell. Once outside the cell, the products can enter the bloodstream and be transported through the body to where they are needed.

Lysosomes are special vesicles formed by the Golgi apparatus to “clean up” the cell. They are the garbage men (or sanitation engineers) of the cell. Lysosomes contain digestive enzymes, which are used to break down products that may be harmful to the cell and “spit” them back out into the extracellular fluid. Lysosomes also remove dead organelles by surrounding the dead organelle, breaking down the proteins of the dead organelle, and releasing them to reconstruct a new organelle. Because the lysosome acts upon its own cell, the process is called autodigestion.

The powerhouses of the cell: The mitochondria