How to Define Biological Evolution

Biological evolution refers to the change of living things over time. Charles Darwin introduced the world to this concept in his 1859 work, On the Origin of Species. In this book, Darwin proposed that living things descend from their ancestors but that they can change over time.

Darwin concluded that biological evolution occurs as a result of natural selection, which is the theory that, in any given generation, some individuals are more likely to survive and reproduce than others.

The theory of natural selection is often referred to as “survival of the fittest.” In biological terms, fitness has nothing to do with how often you pump iron or go to spin class. Biological fitness is basically your ability to produce offspring. So survival of the fittest really refers to the passing on of those traits that enable individuals to survive and successfully reproduce.

The figure illustrates natural selection in action. If a visual predator, such as an eagle, is cruising for its lunch, it will most likely eat the animals it can see most easily. If the eagle’s prey is mice, which can be white or dark, and the mice live in the forest on dark-colored soil, the eagle will see the white mice more easily.

Over time, if the eagles in the area keep eating more white mice than dark mice, more dark mice will reproduce. Dark mice have genes that specify dark-colored fur, so their offspring will also have dark fur. If the eagles continue to prey upon mice in the area, the population of mice in the forest will gradually begin to have more dark-colored individuals than white individuals. 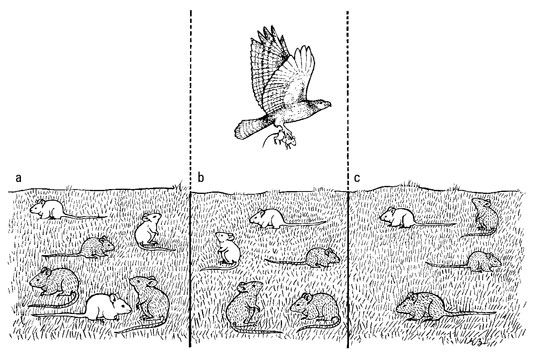 In this example, predation by the eagle is the selection pressure — an environmental factor that causes some organisms to survive and others not to survive.

For natural selection to occur in a population, several conditions must be met:

If these four conditions are met, the new generation of individuals will be different from the original generation in the frequency and distribution of traits, which is pretty much the definition of biological evolution.

A classic example of how natural selection can change a population occurred in Britain during the Industrial Revolution. Peppered moths in England are eaten by birds, which hunt by sight. Prior to the industrialization of England, a light-colored form of the peppered moth was more abundant, even near cities.

The following are answers to the practice questions presented in this chapter.