One of the advantages of gel electrophoresis is that scientists can separate several samples side by side so they can compare them. The comparison of separated DNA molecules is the basic method behind the DNA fingerprints that forensic scientists use to compare samples from crime scenes with those of suspects.

Scientists conduct gel electrophoresis by inserting molecules such as DNA into little pockets called wells within a slab of gel. They then place the gel in a box called an electrophoresis chamber that’s filled with a salty, electricity-conducting buffer solution. 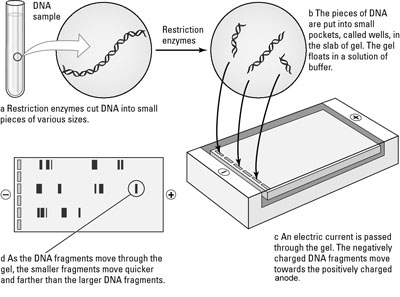 The DNA molecules, which have a negative charge, move toward the gel box’s positive electrode because opposite charges attract. When the scientists run an electrical current through the gel, the gel becomes like a racetrack for the DNA molecules as they try to get to the positively charged end of the box.

When the power is turned off, all the DNA molecules stop where they are in the gel, and the scientists stain them. The stain sticks to the DNA, creating stripes called bands. Each band represents a collection of DNA molecules that are the same size and stopped in the same place in the gel.

In order to work with the information from the gel more easily, scientists can make an identical copy of the gel by transferring the DNA molecules to a thin sheet of nylon or nitrocellulose, a strong but flexible material that binds to DNA. This procedure is called making a blot of the gel. A blot on a thin, flexible material can be handled, whereas the original slab of gel can crack and break.