Cellular Respiration: Using Oxygen to Break Down Food for Energy 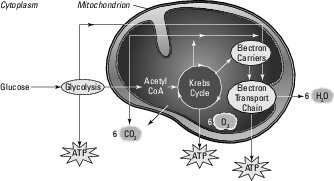 An overview of cellular respiration.

If you remember that the energy in food originally came from the Sun, you can put the pieces together and see that most of the energy needed by living systems comes from space, and eventually exits Earth and goes back into space.

After the large molecules in food are broken down into their smaller subunits during digestion, the small molecules can be further broken down to transfer their energy to ATP. During cellular respiration, enzymes slowly rearrange the atoms in food molecules. Each rearrangement produces a new molecule in the pathway and can also produce other useful molecules for the cell. Some reactions

NAD+ and FAD act like electron shuttle buses for the cell. The empty buses, NAD+ and FAD, drive up to oxidation reactions and collect electron passengers. When the electrons get on the bus, the driver puts up the H sign to show that the bus is full. Then the full buses, NADH and FADH2, drive over to reactions that need electrons and let the passengers off. The buses are now empty again, so they drive back to another oxidation reaction to collect new passengers. During cellular respiration, the electron shuttle buses drive a loop between the reactions of glycolysis and the Krebs cycle (where they pick up passengers) to the electron transport chain (where they drop off passengers).

Different kinds of food molecules enter cellular respiration at different points in the pathway. Cells break down simple sugars, such as glucose, in the first pathway — glycolysis. Cells use the second pathway, the Krebs cycle, for breaking down fatty acids and amino acids.

Following is a summary of how different molecules break down in the first two pathways of cellular respiration:

The proteins of the electron transport chain are like a bucket brigade that works by one person dumping a bucket full of water into the next person’s bucket. The buckets are the proteins, or electron carriers, and the water inside the buckets represents the electrons. The electrons get passed from protein to protein until they reach the end of the chain.

While electrons are transferred along the electron transport chain, the proteins use energy to move protons (H+) across the inner membranes of the mitochondria. They pile the protons up like water behind the “dam” of the inner membranes. These protons then flow back across the mitochondria’s membranes through a protein called ATP synthase that transforms the kinetic energy from the moving protons into chemical energy in ATP by capturing the energy in chemical bonds as it adds phosphate molecules to ADP.

The entire process of how ATP is made at the electron transport chain is called the chemiosmotic theory of oxidative phosphorylation.

The events happening inside mitochondria, as described by the chemiosmotic theory.

At the end of the entire process of cellular respiration, the energy transferred from glucose is stored in 36 to 38 molecules of ATP, which are available to be used for cellular work. (And boy do they get used quickly!)