Organisms in biological ecosystems connect to one another through their need for matter as well as energy. Every organism needs molecules like proteins, carbohydrates, and fats to provide the raw building materials for their cells.

One of the most fascinating facts about Earth is that almost all the matter on the planet today has been here since Earth first formed. That means all the carbon, hydrogen, oxygen, nitrogen, and other elements that make up the molecules of living things have been recycled over and over throughout time. Consequently, ecologists say that matter cycles through ecosystems.

Because the element carbon forms the backbone of the molecules that make up cells, one of the most important biogeochemical cycles to life on Earth is the carbon cycle.

The major components of the carbon cycle are

Take out a sheet of paper to try the practice questions. For questions 1–9, use the terms that follow to label the events of the carbon cycle shown in the figure.

a. Cellular respiration by animals

b. Cellular respiration by plants

i. Conversion of organic carbon to fossil fuels 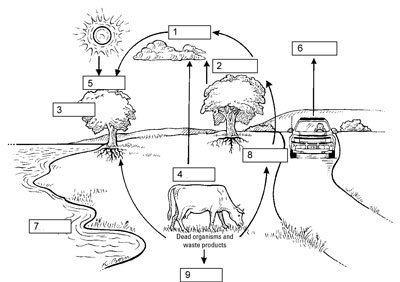