Respiration is the exchange of life-sustaining gases, such as oxygen, between an animal and its environment. Gas exchange occurs by diffusion, moving necessary gases like oxygen into animals and taking away waste gases like carbon dioxide. Although animals have different ways of moving gases in and out of their bodies, gas exchange between the animal and its environment occurs across a moist surface.

Depending on the complexity of their bodies and the environment in which they live, animals evolved different systems to achieve respiration. Four basic types of gas-exchange systems occur in animals:

For questions 1–4, use the terms below to identify which part of respiration is blocked by the condition stated in the question. 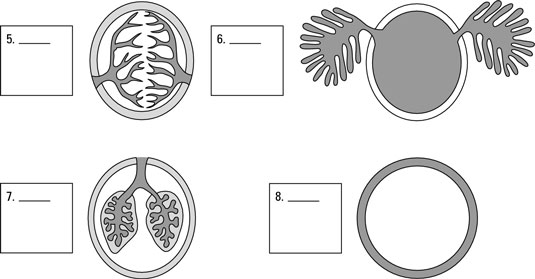 The following are answers to the practice questions presented.