Organs of the Female Reproductive System

The ovaries are two almond-shaped structures approximately 2 inches (5 centimeters) wide, one on each side of the pelvic cavity. They house groups of cells called follicles.

The ovaries are the primary sex organs because they're the site of oogenesis, the process of oocyte maturation. The ovaries also have a major role in endocrine signaling, especially the production and control of hormones related to sex and reproduction, namely estrogen and progesterone.

Beginning at the female's puberty, the process of ovulation begins. The primary oocytes that have been dormant in her ovaries since early in her fetal development are hormonally activated, and secondary oocytes are released at a rate of approximately one per month from menarche (the first menstrual period of her life) to menopause (the last) — that is, from her early teen years to her late 40s or early 50s. The human female ovulates about 400 times during her lifetime.

The uterus or womb nourishes and shelters the developing fetus during gestation. It's a muscular organ about the size and shape of an upside-down pear. The walls of the uterus are thick and capable of stretching as a fetus grows.

The lining of the uterus, called the endometrium, is built and broken down in the menstrual cycle. A portion of the endometrium (deciduas basalis) becomes part of the placenta during pregnancy.

The vagina is the part of the female body that receives the male penis during sexual intercourse and serves as a passageway for sperm to enter into the uterus and uterine tubes. The vagina is about 3 to 4 inches (8 to 10 centimeters) in length. The cervix marks the top of the vagina.

During childbirth, the vagina must accommodate the passage of a fetus weighing on average about 7 pounds (3 kilograms), so the vagina's walls are made of stretchy tissues — some fibrous, some muscular, and some erectile. In their normal state, the vagina's walls have many folds, much like the stomach's lining. When the vagina needs to stretch, the folds flatten out, providing more volume.

In females, the external genitalia comprise the labia majora, labia minora, and the clitoris. Together, these organs are called the vulva. The term labia (singular, labium) means "lips." The labia of the vulva are loose flaps of flesh, just like the lips of the mouth (called labia mandibulare and labia maxillare, by the way). The labia protect the vagina's opening and cover the pelvis's bony structures.

Here are some details about the three parts of the vulva:

All humans have mammary glands, but only females produce a substance we call milk for the nutrition of relatively helpless infants with high calorie requirements. Besides nutrition, breast milk boosts the infant's immune system. 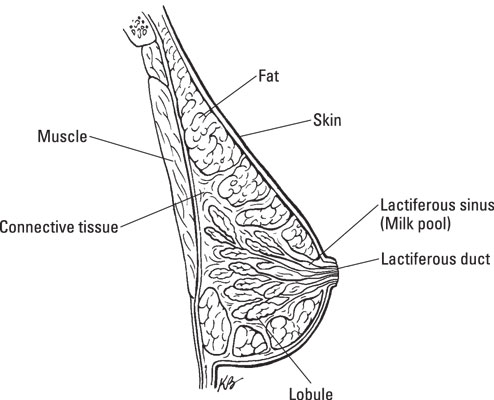 After the infant is born, the mother's pituitary gland secretes the hormone prolactin, which causes the milk-producing cells to create milk, and lactation begins. The infant suckles the milk out of the ducts through the nipple. Lactation continues as long as a child nurses regularly.

The hormone oxytocin is strongly involved in milk release (let-down reflex). Stimulation of the nipple prompts the secretion of oxytocin from the mother's pituitary gland. Oxytocin expels milk from the lobules by causing them to contract, just as it stimulates uterine contractions to expel the fetus. This hormone has also been strongly correlated with neuro-emotional phenomena, such as family bonding.